Meet at the agreed upon time to leave for Valladolid. Panoramic tour of the city where we can contemplate the Main Square (Plaza Mayor), a typical Renaissance square, similar to the Plaza Mayor in Madrid or the one in Salamanca. On the north flank of its retangular shape sits the Town Hall. Facing it is the Zorilla Theatera and between the two, occupying the center of thesquare, is the statue of the founder of the city.  We will also will contemplate the Golden Fountain, the Ochavo, the Corrillo, the Rinconada and the Platerías Streets, the central axis around which the comercial life of the city was organized. We will visit its cathedral, whose origin was a colegiate church dedicated to Our Lady of the Assumption (or Saint Mary) that  Count  Ansúrez decided to build, and that was finished in the year 1100.  Its architectural style was the Romanesque, the Church of Saint Mary la Antigua, a temple that surprises with its large, cuadrangular Romanesque tower, with four levels, three of which are open, and finished in pyramidal shapes. We will also see the façade of the university, which has horizontal lines accented by the balconies and the cornise and is the most important example of baroque architecture in the city.  In the Palace of Santa Cruz we will visit the National Museum of Sculpture and admire among other things its famous polichromatic sculpture, and whose primitive nucleus of collections that it houses come from the disentailed convents of Valladolid and its surroundings. Lunch. Free time. Return to Madrid via Tordesillas and Medina del Campo without stop. End of services. 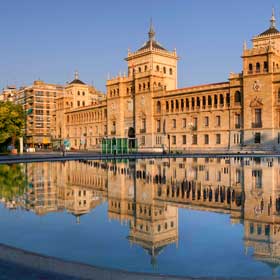