DAY 1 MADRID – TASKHKENT Meeting in Madrid-Barajas Airport to leave on the flight for Taskhent. Night on board.

DAY 2 TASKHNKENT Arrival in Tashkent. Meeting in the airport with the Spanish-speaking guide and transfer to the hotel, lodging. Break in the hotel until the time when we will take a tour of the city with lunch included during the visit. We will see the Jast Iman Square, where the Kaffal Shashi Mosque is found. We will continue the visit in the madrasa of Barakjan from the 16th century and the Museum of the Koran where they have one the first books in History. We will continue on to the monument to the victims of the earthquake in 1966, the Theater Square, the madrasa of Abdul where the peace treaty between the troops of the Russian czar and the city of Tashket was signed. Last we will visit the Museum of the Applied Arts. Dinner in restaurant and Lodging.

DAY 3 TASHKENT – URGENCH – KHIVA Breakfast temprano. Transfer to the Airport of Tashkent to leave on the flight HY1051 at 7:00 A.M. for Urgench. Arrival at 8:40 A.M. and meeting with the guide to leave for Khiva. On arrival, we will take a tour of the city of Khiva, the city-museum. We can stroll through the small streets of Khiva, leave the city limits “Ichan-Kala” corners of the old city. If we look up, we can see the famous dome of Khiva in which it seems that you can see the sea when the billiant sun beams fall on it. The life of the markets of Khiva are full of charm. In the interior of the city we can see Kun Ark, madrasa Mukhammad Amin Khan, Mausoleum Said Alauddin, the mosque Juma and Tash-Khavli. Lunch in restaurant during the excursion. Dinner and lodging.

DAY 4 KHIVA – BUKHARA Breakfast temprano. Departure in coach through desert areas for Bukhara Lunch en route. Arrival in the birthplace of the celebrated physician and philosopher Avicena. The tall minarets of the city served not only for reading prayers but also to guide the caravans of the Silk Road. Dinner and lodging.

DAY 5 BUKHARA Breakfast. We will take a full day tour with lunch included. We will see the Mausoleum of Somoni from the 9th century, one of the most important examples of Isalmic architecture in Central Asia. We will continue the visit in the Chashmi Ayub, the Bolo Jaus Mosque, the fortress Ark and the market covered in the 16th century. Each street has its own history and its own legend. Here they still conserve the majestic Poi-Kalyan from the 12th to the 15th centuries, the madrasa Ulugh Beg from the 15th century and the madrasa of Abdulazizkhan from the 15th century constructed in Kosh style. We will also visit the mosque Magokki Attori, the oldest in Central Asia from the 10 to the 17th centuries. Last we will visit the Historic Architectural Grouping Labi Khauz from the 16th-17th centuries and the Chor Minor “the four minarets”, which has a Library. Dinner and lodging.

DAY 6 BUKHARA – SAMARKAND Breakfast. Departure for Samarkand. During the journey we will visit a ceramic factory in Gijduvan. Arrival in Samarkand and transfer to the hotel and accommodation. Lunch. Later we will visit the Registan Square, the the most important point in the city with three monumental gates, which correspond to the three Koranic schools or madrasas from the 15th to the 18th centuries with a figurative and polichromatic decoration without reference in the Islamic world. We will visit the Gur-e Amir Mausoleum from the 15th century. The extraordinarily beautiful dome next to the golden painted mural and the carved marble will not leave us indifferent. Transfer to the hotel. Dinner and lodging.

DAY 7 SAMARKAND – TASHKENT Breakfast. This day we will take a city tour, when we will see the observatory of Ulugh Beg, a great astronomer from the 15th century to whom the calculation of the continuation of the years is attributed, we will see the Shah-i-Zinda Necropolis where we will be able to follow the history of the development of architecture of the Muslim world, the mosque of Bibi Khanum and the local bazar of Samarkand. Lunch in restaurant. Transfer at the designated time to the high speed train station №161 to depart for Tashkent at 5:00 P.M. Arrival at 7:10 P.M. Farewell dinner in a local restaurant. Lodging.

DAY 8 TASHKENT – MADRID Breakfast. Transfer to the Airport at the designated time of Tashkent to leave on the flight for Madrid. Arrival to Madrid-Barajas Airport and END OF TRIP 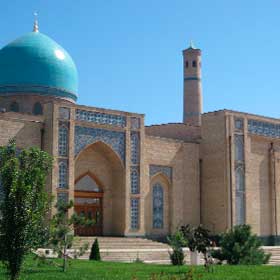 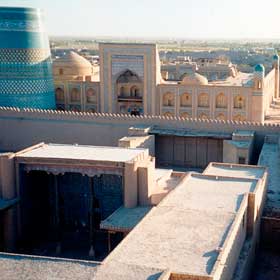 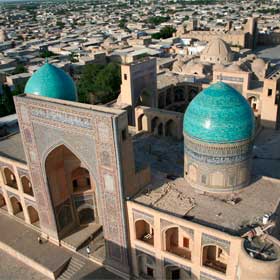 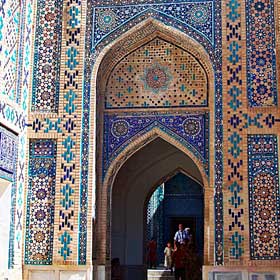