DAY 1 MADRID – CASTILE-LA MANCHA Meeting at the specified time and place. Departure from Madrid for Argamasilla de Alba. They say that it was here that Miguel de Cervantes, emprisoned in the Medrano Cave began to write what would become the most universal novel of Castilian literature. This town is the place in La Mancha whose name Cervantes refused to remember in the first part of Don Quixote. In the Church of St. John the Baptist the ex-voto portrait of Rodrigo de Pacheco was painted. In it appear a lady and a gentleman with crazy eyes and long moustache, a figure that the local inhabitants have always identified as the dreamer knight. Tour of the Medrano House, built in the times of the writer, and of course of Cervantes’ Cave, with the room that served as a prison and in which he was enprisond. Continuation to Alcázar de San Juan, which according to some scholars, can be considered the birthplace of Cervantes. The two most representative buildings of Alcázar de San Juan are the Church of Saint Mary and the palace of the Grand Prior of the Hospitalers. Lunch. Continuation to Campo de Criptana. Typical image of these lands, its landscape presided over by the famous windmills that Don Quijote would confuse with giants. Without doubt, the main attraction of Criptana are its windmills, situated in the Paz Mountains; today 10 of the 32 that it had in other times are still conserved. Three of them are considered monuments because of their antiquity. Tour of the Infant Windmill with the original mechanisms from the 15th century, Culebro Windmill, dedicated to Sara Montiel, of the Criptanian albaicin and of the House-Cave, dwelling of the millers excavate from the rock, from the 15th century. The tour will be completed with the tour of the ladder street, Mucus Fount: spring water fountain, the Plaza Mayor, the Parish church Our Lady of the Ascension (if it is open the day of the tour) and Royal Granary: Grain storehouse from the 16th century and current municipal musum. Departure for El Toboso. Tour of the House of Dulcinea, known from antiquity as “House of the Little Tower”, which belonged to Doña Ana Martínez Zarco de Morales, whom Cervantes immortalized with the name of Dulcinea (Dulce Ana). Rebuilt in the decade of the sixties, is a reproduction of a Manchego mansion from the 15th century with work rooms in ground floor, rear gardens, crurious dovecoat and bedrooms in the upper floor. It conserves period furniture of great interest and popular flavor. Return to Madrid and END OF TRIP. 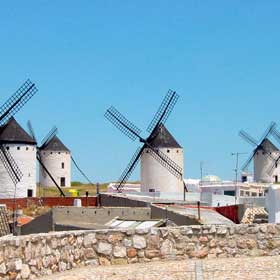 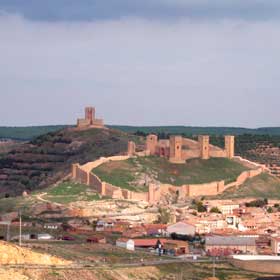