Departure from Madrid for Molina de Aragón, where we highlight its castle, the largest that remains in the province of Guadalajara. Arriving to Molina, the airiness of its stamp surprises from a distance. Continuation to Albarracín, considered one of the prettiest towns in Spain. To this we add its surroundings: lovely mountains of pines and junipers, inhabited by deer, raptors and endemic insects, and roamed by nomadic shepherds and wild bulls. Also, rocks which take curious shapes, large sinkholes and abundant water, for in the so-called Universal Mounts are born prominent river courses such as the Tagus, the Cabriel, the Turia or the Guadalaviar.  Lunch and Continuation to Teruel., declared by UNESCO World Heritage due to the Historic Grouping formed by its large Mudéjar monuments. Dinner and lodging.

Breakfast. Morning panoramic tour of the city. Its main tourist attractions include the Cathedral, the largest Mudéjar church in Spain, and the Lovers of Teruel, found in an anex to the Church of Saint Peter. Their mummified bodies rest beneath the reclining alabaster statues made by the sculptor Juan de Álavos. In the year 1217, the young woman was young and he poor, placing them in different social classes. Juan Diego Martínez de Mclay received a period of five years to become rich, and and he left to make his way in the world.  When he returned wealthy, she had already married, causing Diego to die in pain. During the burial, Isabel de Segura approached the casket, gave him a kiss and suddently died next to him.  Also famous in Teruel is the Little Bull (Torico), which was placed on a column in the center of the square with its name in 1858. One must look very carefully to see the Little Bull since the column is wider than the bull (it is a very small bull) that is placed on its upper part. It has become one of the emblems of the city. Lunch and afternoon departure for Rubielos de Mora and Mora de Rubielos. Mora de Rubielos, at the foot of the Sierra de Gúdar, is the capital of the region of Gúdar – Javalambre, on the banks of the river Mora. Its inhabitants are called “moranos.” The outline of its streets is medieval. In 1978 it was declared Historic-Artistic Grouping. Its main tourist attractions include the Castle and the Church. Rubielos de Mora, in the Sierra of the Maestrazgo in the abrupta border between the provinces of Teruel and Castellón. It conserves one of the best urban Historic Groupings. Despite being small, it is walled. The monumental complex invites one to a slow stroll roaming to all of its corners. Return to Teruel. Dinner and lodging.

Breakfast and departure for Monasterio de Piedra. Hidden among the abrupt mountains of the Iberian System in the municipality of Nuévalos in the province of Zaragoza, the Natural Park of Monasterio de Piedra offers us one of the most gratifying experiences that can be found, an unusual orchard around water and its movement in waterfall and grottos. Lunch and departure for Madrid and END OF TRIP 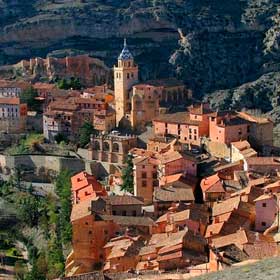 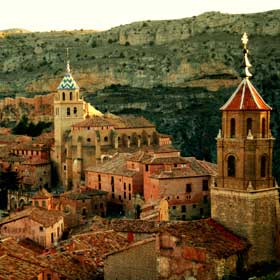