DAY 1 MADRID – DAMASCUS At the designated time, meeting in Madrid-Barajas Airport to leave on the flight to Damascus. Transfer to the hotel. Dinner and lodging.

DAY 2 DAMASCUS Breakfast and full day tour dedicated to visit the city of Damascus, the capital of Syria. We will begin with the National Museum of Damascus where we will be able to discover a large part of the history from the first anals of human existence. Next to the museum is the Tekkiye Mosque complex, which was designed to receive the pilgrims who where going to Mecca and was constructed by order of Suleiman the Magnificent. Today the complex hosts an artisan fair, where most of the objects are made of silver. Continuation to the Souq Hamidiye, the most important souq in the city, where all kinds of objects can be found. Tour of The Grand Umayyad Mosque, one of the most impressive constructions dedicated to muslim worship. Tour of the Mausoleum of Saladin. Lunch in a local restaurant. Continuation to Azm Palace, where we will be able to get a good idea of how they used to live and the customs of the damascenes. Continuation of the visit along the Damascus Straight street (also know as the Via Recta) and at the Khan As’as Pash, inn for the pilgrims and merchants. In the Christian neighborhood we will visit the Chapel of Saint Ananias, the Window of Saint Paul, which reminds us of the Paul’s conversion to Christianity. Return to the hotel. Dinner and lodging.

DAY 3 DAMASCUS – BOSRA – JERASH – AMMAN Breakfast and departure for Bosra. This town has the most beautiful and best preserved Roman theater in Syria. Constructed in the 2nd century, it can house up to fifteen thousand spectators. Every summer they have local and international performances wrapped by a natural decoration of Roman arches and columns. The city conserves, in addition, a large number of Roman ruins: baths, columns, monumental gates, etc. Lunch in a local restaurant and continuation to Jerash, one of the cities of the Decapolis where the Triumphal Arch, the Oval Forum, the Cardo Maximus, the colunnade, the Temple of Artemis and finally, the Roman theater, with marvelous acoustics, all stand out. Later we will continue on to Amman, transfer to the hotel, Dinner and lodging.

DAY 4 AMMAN – PETRA Breakfast. Departure to take a panoramic tour of Amman, visiting the Citadel, the ancient Greek Acropolis, or the Roman theater. Lunch in a local restaurant and later departure for Petra, where we will be able to visit the Nabataen city by night. Transfer to the hotel, dinner and lodging.

DAY 5 PETRA – KERAK – DEAD SEA Breakfast and tour of Petra, the “Pink City” This mysterious city was erected by the Nabataen people as a refuge and created beginning with caves excavated from the rock more than 2,000 years ago. We highlight “The Siq”, and we will arrive to the archtectural jewel of the Khazneh “Temple of the Treasury”. Other points of interest are the Roman theater, the Royal Tombs, etc. Lunch and departure for the crusader castle of Kerak, one of the three largest castles in the region; The other two are in Syria. Continuation to the Dead Sea. Dinner and lodging in the area.

DAY 6 DEAD SEA – PALMYRA Breakfast and departure for Palmyra, where we will arrive in time for lunch in a local restaurant. In the afternoon, city tour. Palmyra has to its credit one of the best Historic Monumental Groupings in all of the area. Its ruins are spectacular and Its level of conservation is quite good. Prominent are the Temple of Bel, the Triumphal Arch, the Gran Colonnade, the Agora, and the Theater. We will also visit the tombs, curious burial forms. Having finished the visit, transfer to the hotel, dinner and lodging.

DAY 7 PALMYRA – ALEPPO Breakfast and departure for Aleppo. Arrival and lunch in a local restaurant. Later we will visit the Citadel, base of the Arabic military architecture, The Great Umayyad Mosque, sacred place of religion and worship. We will take a walk through its streets and especially through its famous souqs, one of the largest and most impressive in the Arabic world, with its more than 14 km. of streets, businesses, flavors, smells, etc. Dinner and hotel stay until transfer to the Airport of Aleppo. 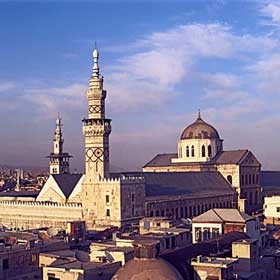 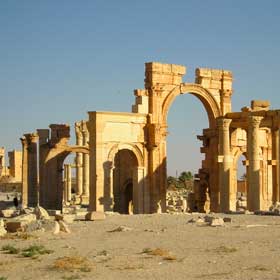