SOURCE OF THE CUERVO RIVER (3 DAYS)

Departure in coach for the Monastery of Uclés. Known as “The Escorial of La Mancha” it sits on the cuspid of a hill, at whose feet, the town of Uclés unfolds to the east. The monastery forms part of a great Historic Grouping of edifications constructed during different periods of History and that had its origins during the Muslim domination and reached its fullness as a fortificaction during its possession by the Order of Saint James, when it acquired its present appearance at the end of the Reconquest. The monastery was declared National monument on June 3, 1931. The New building was constructed in the 16th century in Renaissance style, although the southern façade, and the most known of the monastery, is barroque. Its autor is Pedro de Ribera. It has two grand doors decorated with scallop shells over crosses of Saint James. The façade is decorated with armor, helmets, flags and a sculpture a half body of the Apostle. Lunch and ontinuation to Cuenca. Dinner and lodging.

Breakfast. The historic center of this beautiful city is a prominent tourist and cultural center with its medieval Arabic outline and las singularities of a hilly settlement: alleys, passageways and monuments marked in a very special natural landscape. Tour of the emblematic Hanging Houses, buildings of popular Gothic origins suspended in the façade de the Hoz del Huéscar and that today houses the Museum of Abstract Spanish Art with works by Chillida, Saura, and Tápies, among others. Lunch Free time in the city. Dinner and lodging.

Breakfast and departure for the source of the Cuervo Rivera 80 kilometers from Cuenca. Entering into the mountains we find one of the most attractive natural areas of Cuenca. Departure via the highway that follows the Hoz del Júcar and enters the mountains. As we enter, we will find small towns, some of them medieval.  12 kilometers past Tragacete we will reach the source of the Cuervo River. Once there, we will take a stroll along the marked paths and follow parallel the course of the river, passing waterfalls, springs and springs of crystalline water. At the end of the path, we will find the grotto where the water comes out in streams. Definitely a landscape of beauty that is very dificult to equal. Lunch and return to Madrid.  END OF TRIP 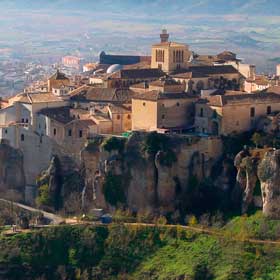 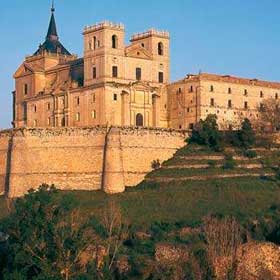