DAY 1 MADRID – BUDAPEST – BRATISLAVA Meeting in the airport at the indicated time to embark on a flight to Budapest. Arrival and tranfer in coach to Bratislava, capital of Slovakia. Short Walking tour of the city. Situated in the spurs of The Carpathians, it is today a modern city, on the banks of the Danube, with many attractions. Dinner and lodging.

DAY 2 BRATISLAVA – TRAINCIN – HIGH TATRAS REGION Breakfast. Departure, with lunch en route, for Tatranska Lominca, traveling through Traincin, an enchanting city beneath a medieval Castle. Continuation through the Vah Valley to Lake Strbske, where we will be able to enjoy a splendid panorama of the Tatra Mountains. Arrival to the hotel. Dinner and lodging.

DAY 3 HIGH TATRAS REGION – EXCURSION TO THE REGION OF SPIS Breakfast. Departure to take an excursion to Spis, region that is considered a treasury of art in Slovakia, such as the Spis Castle, one of the largest in Europe and constructed in the 12th century, and the fortified city of Spisska Capitula. Lunch in Levoca, one of the lovliest cities in Slovakia, which features the Church of Saint James, which has the largest wooden Gothic altar in the world. Ascent in funicular to Hrebienok. Dinner in restaurant. Lodging.

DAY 4 HIGH TATRAS REGION – EXCURSION TO KEZMAROK AND REGION OF ZAMAGURIE Breakfast. Departure for Kezmarok, where we will visit the splendid wooden Lutheran church. Continuation to the region of Zamagurie, a unique region due to is nature and its historic architecture, with the Pieniny National Park. The meandering curves of the river of the park form the border between Slovakia and Poland. Picnic lunch outdoors in Chata Pieniny. Afternoon tour of Cerveny Klastor, a medieval monastery whose cloister is an architectural pearl. Return to the hotel. Dinner and lodging.

DAY 5 HIGH TATRAS REGION – EXCURSION TO ZAKOPANE Breakfast. Excursion, with lunch to Zakopane, at the feet of the Polish Tatra Mountains, very near the border with Slovakia. Zakopane has a special charm that sets it apart. It is the capital of the region framed by the picturesque Tatra Mountains, the the highest massif in Poland, that att he same time is the loveliest section of the lengthy Carpathian Mountains. In Zakopane one is attracted not only by its landscape but also by its people, the hospitable górale (moutain dwellers), that very attached to its land has known how to preserve a rich folklore of which their traditional costumes are only a sample. We can also enjoy their artisanmarket. Return to the hotel. Dinner and lodging.

DAY 6 HIGH TATRAS – BANSKA BYSTRICA – BRATISLAVA Breakfast. Departure for Banska Bystrica, which was a prosperous mineral region of silver and copper during the Middle Ages and that has known how to preserve its historic square and lovely Gothic churches. Lunch. Continuation to Bratislava. Dinner and lodging.

DAY 7 BRATISLAVA Breakfast. Morning departure to visit the area of the Carpathians, with vineyards and small wine-making cities. We will see the Cerveny Kamen Castle, the former residence of the Palffy dynasty, the best fortress in the Carpathians. Lunch with typical specialties. Afternoon free. Dinner and lodging.

DAY 8 BRATISLAVA – BUDAPEST – MADRID Breakfast. Transfer to the Airport of Budapest to leave on the return flight to Madrid. Arrival and END OF TRIP 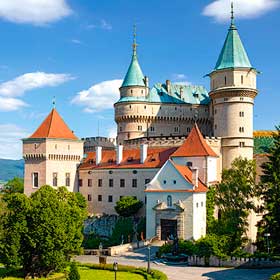 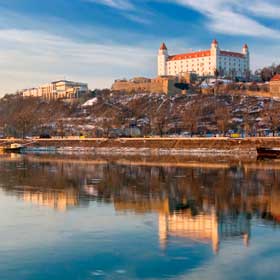