Shrines of Huesca and Monasteries of the Pyrenees

DAY 1 MADRID – ZARAGOZA – HUESCA Meeting at the agreed upon time to leave by coach for Zaragoza, location of the Basilica of the Pilar. Built over a primitive Mozárabe church, it reflectss different constructive and ornamental styles. Lunch and continuation of the journey to Huesca. Dinner and lodging.

DAY 2 HUESCA- TORRECIUDAD – BARBASTRO – HUESCA Breakfast and departure for Torreciudad, whose name is of particular Marian devotion in Upper Aragón. The new shrine, promoted by Beato José María Escrivá de Balaguer, founder of the Opus Dei, with the help of thousands of people, it was opened for worship in 1975. Lunch and afternoon tour of Barbastro, in its monumental complex, it is worth noting the Cathedral from the 15th century, in addition to the Argensola palaces that houses the library and the Episcopal palace. Return to Huesca. Dinner and lodging.

DAY 3 HUESCA – LOURDES – HUESCA Breakfast and departure for Lourdes. One of the most visited pilgrim centers today, a meeting place of universal sharing, where thousands of volunteers accompany the hope of the ill. Tour of the Grotto, the basilicas, the springn and the fountains. Lunch. In the afternoon return to Huesca. Dinner and lodging.

DAY 4 HUESCA – EXCURSION TO JACA Breakfast and departure for Jaca, national artistic ensemble, where we will be able to visit the Romanesque Cathedral, the Citadel, the Arcaded Square, Aragonese Plateresque Town Hall the 15th century. Lunch. Free time In the afternoon and return to Huesca. Dinner and lodging.

DAY 5 HUESCA – SAN JUAN DE LA PEÑA Breakfast. Morning tour of Huesca, we will be able to admire the Cathedral, Saint Peter the Old, Saint Lorenzo, the patron saint of the city, Town Hall, the Provincial Government and the Miguel Servet Park. Lunch. Afternoon departure for San Juan de the Peña, where we will find two monasteries, the most recent of Romanesque style from the 12th century and the other from the 10th century founded by the Benedictines. Return to Huesca. Dinner and lodging. 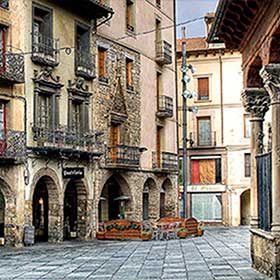