DAY 1 MADRID – BARI – SAN GIOVANNI ROTONDO Meeting in Madrid-Barajas Airport to take a flight to Bari. Arrival in Bari, capital of the region of Apulia and the second main city of sothern Italy after Naples. City tour. Its most prominent monuments include the Castle founded by the Normans and rebuilt by Frederick IIII, the Cathedral dedicated to Saint Sabina, and Saint Nicholas Church founded in the year 1087. After the visit, continuation toSan Giovanni Rotondo. Transfer to the hotel. Dinner and lodging.

DAY 2 SAN GIOVANNI ROTONDO – Excursion to Mount San Angelo Breakfast. Morning tour of this town situated in the center a great valley halfway between such high summits as the Gargano, Mount•Nero and Mount Calvo, conserving still today the structure of an ancient mountain village, with white buildings roofed with the characteristic red clay tile. Lunch during the tour. After lunch, we will have time to visit the places Saint Pio of Pietrelcina walked. Known as Father Pío, famous for is supernatural deeds and for his stigmata, the five wounds of Christ crucified that he carried visibly on his body for 50 years. After the visit, departure for Mount San Angelo, visiting the Shrine. Constructed in a transition style between Romanesque and Gothic, the Shrine is flanked by a Free octogonal bell tower. A long covered staircase leads to a beautiful bronze door, byzantine work from 1076 that gives access to the nave of pointed arches that leads to the grotto where Saint Michael appeared to the Bishop of Siponto. The marble statue of the saint is work of Andrea Sansowine. Free time to continue visiting this beautiful city. Return to San Giovanni Rotondo. Transfer to the hotel. Dinner and lodging.

DAY 3 SAN GIOVANNI ROTONDO – NAPLES Breakfast. Departure for the city of Naples. Arrival in Naples and city tour of the capital of the region of Campania, with lunch during the tour. Naples was founded as Greek colony in the 6th and 7th centuries B.C. and flourished during the Roman Empire. Its streets reflect the Roman, medieval and Spanish periods, and it counts among its historical buildings the Castel Nuovo, un imposing castle constructed in the 12th century and remodeled in the 15th, the Villa Floridiana, splendid town from the 19th century, the world famous Opera House of San Carlo, constructed in 1737, the National Museum, etc. We will visit the Church of Sansevero situated in the historic center of Naples. The Chapel Sansevero was built in the year 1590 by commission of the family Sansevero as an offering to the Virgin Mary. Similarly,the Chapel Sansevero guards almost thirty works of art, among which are found three idiosyncratic sculptures, Which are clearm emblems of the artistic excess that abounded in the late Baroque. However, one of the loveliest works in the Chapel Sansevero is the Recumbent Christ, work of Guiseppe Sanmartino. This lovely sculture has a very impressive illusionist effect, that reveals the naked body of Christ covered by a fine veil. Naples also stands out for the “Neapolitan Nativity Scenes”. The most celebrated example of a Neapolitan nativity scente, the Cuciniello nativity scene made between 1887 and 1889, is currently exhibited in the San Martino Museum. After the visit, transfer to the hotel. Dinner and lodging

DAY 4 NAPLES – EXCURSION TO CAPRI, SORRENTO AND THE AMALFI COAST Breakfast. Departure for a full day excursion with Lunch to Capri and the Amalfi Coast. The island of Capri is anchored in the blue waters of the Golf, and it was considered in the Roman period to be a “place given by nature for resting the spirit and pleasing the senses.” Between Sorrento and Salerno is located what is know by the name of the Amalfi Coast, a piece of paradise on the banks of the Mediterranean (declared by UNESCO World Heritage Site in 1997) which for years served as a refuge for artists, aristocrats and millionaires from half the world. Tour of Amalfi (one of the first marine republics in Italy, and for this reason an important commercial and cultural center during the Middle Ages) and Sorrento. Return to Naples. Dinner and lodging.

DAY 5 NAPLES – POMPEII – MADRID – MADRID Breakfast. Departure for the city of Pompeii. Tour of the city buried in the year 79 A.D. by the eruption of Vesubius during the reign of the Emperor Titus, where we can get a pretty exact idea of what daily life was like in a Roman city during the empire, with its streets and its public and private spaces. Lunch and at the designated time, and transfer to the Airport of Naples to leave for Madrid. Arrival and END OF TRIP 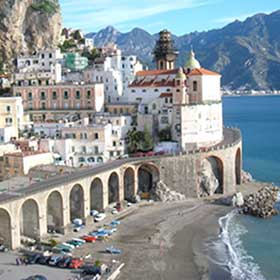 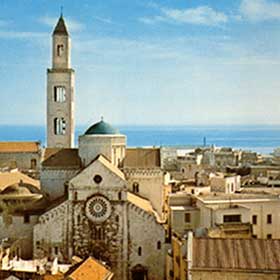 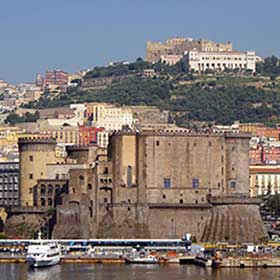 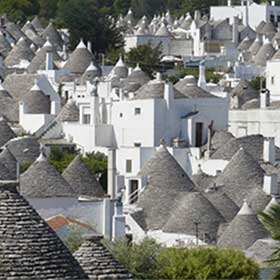