Arrival in Madrid, baggage collection and meeting with the accompanying guide. Transfer to the hotel. Dinner and lodging.

Breakfast. At the designated time, Departure in coach for Cordoba. Cordoba is one of the best preserved cities in Spain. It is a millenial city with a very extensive historic center, declared World Heritage Site by UNESCO in 1984. Arrival in Cordoba. Lunch in typical restaurant “La Cazuela de the Espartría”. In the afternoon, guided tour of the Great Mosque, most splendorous monument in the West from the Muslim domination and symbol of the city with 1200 years of history. Also we will have a guided visit through the famous Cordovan patios, declared Inmaterial Cultural Heritage by UNESCO in 2012. Transfer to the hotel. Dinner and lodging.

Breakfast. Departure for Montilla. Arrival in Montilla and guided visit of a wine cellar, where we will visit its facilities, get to know the system of production of the wines and enjoy a tasting. Continuation to Lucena. Arrival to the hotel. Lunch. Afternoon tour of Lucena. This city lived one of its splendors in the Muslim period, where it made up the main Jewish town in Al Andalus. The coexistence of Christians, Jews and Arabs gave it the name of city of the three cultures. Currently it is the second most imporant city in the province of Cordoba after the capital. Eliossana, Hebrew name for Lucena, was known in the past as the “city of the poets”, its fame spreading through all the centers of Jew in Europe and the Mediterranean, which gave Lucen the title of “Pearl of Sefarad”. We will take a guided tour through the Jewish past of Lucena along with a tasting of Sephardic baked goods. Dinner and lodging.

Breakfast. Morning departure for Antequera. Situated in the lap of the unique natural setting of El Torcal and beneath the atent gaze of the profile that conforms to the shape of the Lovers’ Rock next to its fertile valley, Antequera is history and monumentality.  We will enjoy a unique experience, in which the very Prince Fernando, along with the other characters from the period, will sally out to meet us to tell us through passages of history the evolution of the emblematic Alcabaza of Antequera. Lunch. In the afternoon, we will get to know The secrets of the Royal Colegiata, one of the most emblematic monuments of the city. We will be able to enjoy a guided visit through the Collegiate Church in which we will relive the history of one of the first works of the Renaissance in Andalusia and Seat of the Chair in Grammar. Return to Lucena. Dinner and lodging.

Breakfast. Departure for the rica and beautiful city of Priego de Cordoba, birthplace of the baroque. Arrival and city tour. Our senses will be delights by a marvelous olive oil tasting. Continuation to Jaén, city of great touristic interest due to his historical and monumental heritage. The city rises up at the feet of the Mount of Santa Catalina, with steep streets and pronounced slopes that define its urbanism. Lunch. Return to Madrid. Free time to enjoy the night life of the city. Dinner and lodging.

Breakfast. Transfer to the airport at the specified time to embark on un flight to your place of origin. END OF TRIP 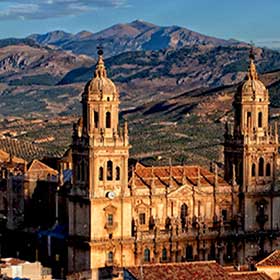