Arrival at the specified time to depart for Ávila. Stop in order to admire its walls, which are more than 2 kilometers long and have been manificently conserved and restored. Continuation to Salamanca. Lunch and city tour declared in 1988 World Heritage Site. Salamanca has an historical and cultural heritage of undoubted richness, and it is one of the most monumental cities in Spain, both due to the quantity and quality de its monuments as well as to the variety of its architecture. It can be said that Salamanca is an authentic street museum.  We highlight the magnificent structure of its famed Plaza Mayor (Main Square), its monumental Cathedrals (Old and New), the university, the popular Casa de las Conchas and its Roman bridge, without forgetting many other civil and relgious buildings. Dinner and lodging.

Breakfast and departure for Arribes del Duero to take an environmental cruise, covering some of the most peculiar natural areas in the Penninsula. Continuation to Zamora, Lunch and city tour in which we highlight the Cathedral from the 12th century, the most representative of the Zamoran monuments, the former garden of the castle, the wall, the Church of Saint Ildefonse and of the Magdalene, Church of Saint John, Plaza Mayor (Main Square) etc. Return to Salamanca. Dinner and lodging.

Breakfast. Departure for Guijuelo.  In this town is found the seat of the Regulating Counsel of the Denominación de Origen of Guijuelo, created more than 20 years ago and pioneer in the sector of ham. The microclimate of this region is characterized by cold and dry winters, as well as short and mild summers, and it allows for a perfect drying and excellent maturation of hams. Tour of ham dryer. Continuation to Candelario.  Its streets and buildings have typical architecture with various centuries on its back.  Many of them conserve their original structure, with three levels; in olden times, the last of the three floors served as the attic in which, with the smoke of chestnut wood, the slaughter was cured. Another of the singularities of the town are the batipuertas, found in the entrance of almost all the homes. Lunch and departure for Madrid. Arrival and END OF TRIP. 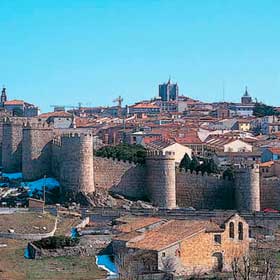 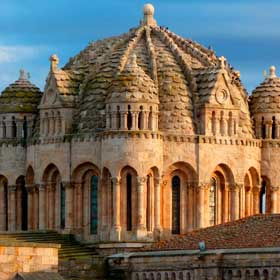 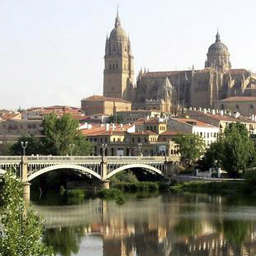