DAY 1 MADRID Arrival to Madrid and meeting with the accompanying guide. Transfer to the hotel and free time. Dinner and lodging.

DAY 2 MADRID Breakfast. In the morning, we will take a panoramic tour of the city, becoming acquainted with emblemtic corners such as the Puerta del Sol. Then tour of the Royal Palace, official residence of the kings of Spain, although currently this building only houses ceremonies of State. Free time. Dinner and lodging.

DAY 3 MADRID Breakfast. Then we will visit the Prado Museum, whose corridors house some of the most important art works of Spain by the internationally most known artists like Velázquez, Goya, El Greco, etc. In the afternoon, we will visit Santiago Bernabéu Stadium. Transfer to the hotel. Dinner and lodging.

DAY 4 MADRID – EXC. AVILA, SEGOVIA Y GRANJA DE SAN IDELFONSO Breakfast. Tour of Ávila, UNESCO World Heritage Site. We will make a stop at “Las Cuatro Postes” (the Four Posts), from where we can see one of the best views of the city. We will visit the ancient wall that protects the city, the Alcázar, the Cathedral and the Basilica of Saint Vincent. We will continue to Segovia. City tour when we will be able to contemplate the most emblemtic monuments, such as the Alcázar, the Roman aqueduct, etc. Then we will move to La Granja de San Ildefonso, to visit the Royal Palace, summer residence of the royal family. Return to Madrid. Dinner and lodging.

DAY 5 MADRID – EXCURSION TO TOLEDO Breakfast. Morning city tour de Toledo, known for having been the capital of Spain and one of the oldest cities in Europe. It is made up of various monuments built by different cultures: Jewish, Arabic, Christian. This city was declared a World Heritage Site by UNESCO. Return to Madrid. Free time. Dinner and lodging.

DAY 6 MADRID – SANTO DOMINGO DE SILOS – BURGOS Breakfast. Departure for Santo Domingo de Silos, the largest and best Romanesque monastery in Spain. Continuation to Burgos, key city on St. James’ Way which preserves multiple vestiges of the Medieval period. The city was the capital of the Kingdom of Castile and León for five centuries, and it features a masterpiece of Gothic architecture: The Cathedral of Burgos, declared World Heritage Site. Transfer to the hotel. Dinner and lodging.

DAY 7 BURGOS – CARRION DE LOS CONDES – SAHAGUN – LEON Breakfast. In the morning we will leave for Frómista, following the line of the Canal of Castile. We will visit the Church of Saint Martin, an example of Romanesque architecture in our country. Then we will leave fcor Carrión de los Condes, whose medieval origins can be seen in some of the buildings in the historic center. The most characteristic monument of this locale is the Church of Saint James, famous for its splendid Christ Pantocrator. Continuation to Sahagún. In this locale we will visit various Romanesque churches, built by the Mudéjars. The most spectacular is the Churct of Saint Lawrence, and the oldest the Church of Saint Tirso. Transfer to the hotel in León. Dinner and lodging.

DAY 8 LEON – ASTORGA – LUGO Breakfast. City tour of León, capital of the ancient Kingdom of León, the city with the largest number of medieval buildings. The royal pantheon of Saint Isidore is one of the first, and the best, Romanesque monuments in Spain. The Cathedral, whose windows conserve ancient stained glass that spreads special light in the interior of the temple, is truly exceptional. Continuation to Astorga, meeting point on the ancient Roman road “Via de the silver” (Silver Route) and St. James’ Way. We will be able to admire the Episcopal Palace built by Gaudí and its marvelous Cathedral. We will continue our journey to Lugo to finish the day, locale declared World Heritage Site by UNESCO. We will take a panoramic tour through the city. Transfer to the hotel. Dinner and lodging.

DAY 9 SANTIAGO DE COMPOSTELA Breakfast. City tour of Saint James. Around Obradoiro Square, we will find a complex of spendid buildings such as the Cathedral of Santiago and the Parador of the Catholic Kings, with its plateresque facade. Transfer to the hotel. Dinner and lodging.

DAY 10 SANTIAGO DE COMPOSTELA – LOWER RÍAS Breakfast. We will take an excursion to the region of the Lower Rías, which contain four large estuaries, beautiful beaches, exceptional landscapes, irrisitible cuisine and the natural park of the Cies Islands, one of the best attractions of the Galician coast. Return to the hotel in Santiago. Dinner and lodging.

DAY 11 SANTIAGO DE COMPOSTELA Breakfast. Transfer to the airport at the agreed upon time to board the scheduled flight to our point of origin. End of services. 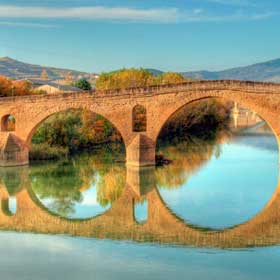 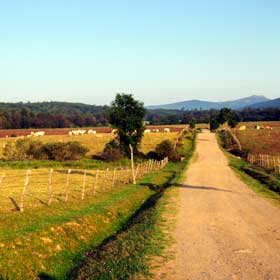