Russia And The Golden Ring

DAY 1 MADRID – SAINT PETERSBURG Meeting in Madrid-Barajas Airport at the scheduled time to embark on a flight for Saint Petersburg. Arrival in Saint Petersburg and transfer to the hotel. Dinner and lodging.

DAY 2 SAINT PETERSBURG Breakfast. Tour of the Peter and Paul Fortress, the the oldest building in the city, where Dostoievski, Gorki, Trotski or the oldest brother of Lenin, Alexander, were prisoners. The attached cathedral, although simple on the outside, has a magnificent baroque interior. The majority of the Russian Romanov leaders were buried here. Between the cathedral and quarters of the officials stands a statue of Peter the Great of curious proportions. Lunch in a restaurant. Excursion to Petergoff to visit the palace and its magnificent fountains. Transfer to the hotel. Dinner and lodging.

DAY 3 SAINT PETERSBURG Breakfast. Departure for Puskhin, fomerly called Tsarskoe Selo, created by Empress Elizabeth and Catherine the Great and situated 25 km to the south of Saint Petersburg. The baroque Catherine Palace was left in a ruinous states by the Germans at the end of the Second World War, but today it is a masterpiece of restoration. The façade has golden domes and details in white and blue, while the interior really glitters and shines, with mirrors, chandeliers and plump cherubins. Just to the north of the Catherine Palace is found the classical Alexander Palace. Lunch. Afternoon tour of the Pavlovsk Palace with its English-style park, in which we can enjoy in the surrounding area contemplating the Temple of Friendship, the Monument to the Parents, the Little Milk House, the Rose Pavillion, the White Birch Arbor and the Valley of the Ponds. Return to Saint Petersburg. Dinner and lodging.

DAY 4 SAINT PETERSBURG – MOSCOW Breakfast. Tour of the Hermitage, situated in the winter palace, the size of a small city. It houses a impressive collection of Western European art with plenty of chandeliers, ciling inlays, czarinian jewels and treasures. Lunch. Free time. Dinner and departure for the station to take the train for Moscow. Night on board.

DAY 5 MOSCOW Breakfast. Arrival in Moscow. Morning panoramic tour of the city situated on the banks of the Moskva River. Lunch in restaurant. Transfer to the hotel. Dinner and lodging.

DAY 6 MOSCOW Breakfast. Tour of the Kremlin, heart of Russia, inlcuding a Cathedral. Lunch. Tour of the Tetrikov Gallery, where we will be able to admire a singular collection of icons. Dinner and lodging.

DAY 9 SERGUIED POSAD– MOSCOW – MADRID Breakfast. Transfer to the Airport of Moscow to embark on flight for Madrid. Arrival to the airport of Barajas, and END OF TRIP 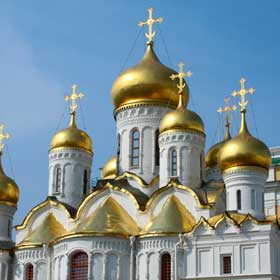 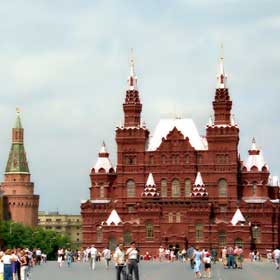 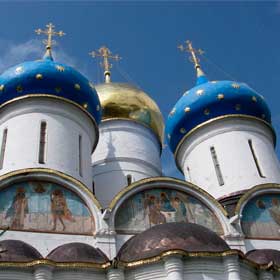 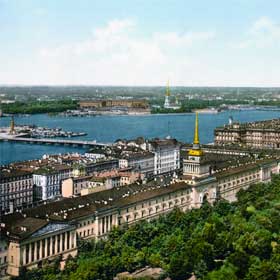 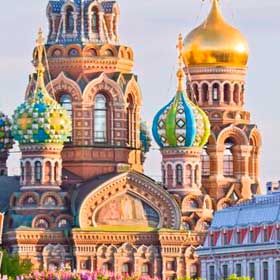