ROUTE OF THE VIKINGS

DAY 1 MADRID – COPENHAGEN Meeting in the airport to embark on a flight to Copenhagen. Arrival in the Danish capital and panoramic tour of the city with local guide in which we admire the principal sites and monuments and of course the monument to the mermaid next to the wharf. Free time. Dinner and lodging.

DAY 2 COPENHAGEN – ODENSE Breakfast. Departure for the city of Roskilde. Tour of the beautiful Medieval Cathedral of Saint Lucas, where they conserve the remains of 38 Danish kings, and of Viking Boats Museum, where they conserve five boats of diverse types, that they found in the depths of the fjord of this town. Lunch. Continuation to Odense. Stop in Trelleborg to visit its castle. Arrival in Odense. Dinner and lodging.

DAY 4 RIBE- AALBORG Breakfast. Short tour of the oldest city in Denmark with its Gothic church and cloister. Tour of the Viking Center, an outdoor thematic museum with activities that show us daily life in a city around the year 1000. Lunch in the Viking Center. Continuation to Aalborg, famous for its production of akevitt, the national Danish licor destilled from potatoes and aromatic spices. Dinner and lodging.

DAY 5 AALBORG – KRISTIANSAND – COAST OF THE SOUTH OF NORWAY Breakfast. Departure for the port of Hirtshals to take a ferry to Kristiansand. The city was founded by King Christian IV de Denmark, known as the beach city of Norway. Short orientation walk. Lunch. Continuation to Skien or other coastal town. Dinner and lodging.

DAY 6 COAST OF THE SOUTH OF NORWAY – OLSO Breakfast. Departure for Oslo. Stop and short orientation walk in the town of Tönsberg, sister town with the Spanish Town of Covarrubias. Tour of its spectacular panoramic point and of the monument to Princesa Christina, sole Norwegian princess who lived in Spain and daughter of King Haakon Haakonson. She was born in the year 1234 and married Prince Philip of Castile, brother of King Alfonso X the Wise. She resided in Seville and is buried in the family pantheon in Covarrubias, in the province of Burgos. Lunch. Continuation to Oslo, known as the Viking capital. Free time. Dinner and lodging.

DAY 7 OSLO Breakfast. Panoramic tour with guide including not only the main sites in the capital but also the Folklore Museum with one of best preserved medieval wooden churches in Norway. These churches are oldest buildings in the world that were constructed entirely in this fragil material that still conserve the original wood. Tour of the Viking Boat Museum where they conserve three war boats from the Viking period, spectacular for their good state of conservation, in addition to remains of clothing, utensils, sleds, etc. Lunch. Ascent to the hill of Holmenkollen to admire the view and the ski jump Also we will visit the ski museum where they conserve some of the oldest skis in the world. Dinner and lodging.

DAY 8 OSLO – MADRID Breakfast. Free time and, at the scheduled time, transfer to the airport to leave on the return flight to Madrid. Arrival and END OF TRIP 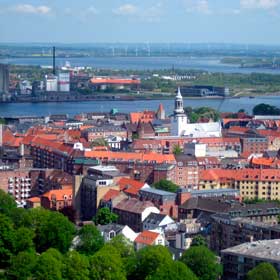 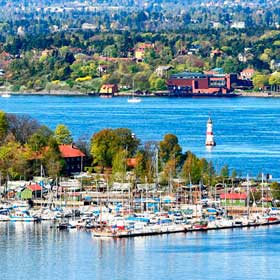