ROUTE OF THE ROAST AND RIBERA DEL DUERO (3 DAYS)

Departure from Madrid for Riaza, at the foot of the mountain of Ayllón, where we will have Lunch. Arrival in Burgo de Osma, gorgeous Castilian town, with its arcaded streets flanked by ancient mansions, Seat of a Bishopric from the visigothic period (10th century). Dinner in the hotel Virrey Palafox, based on products from the hog slaughter. Lodging.

Breakfast and Tour of the Cathedral of the Burgo de Osma, the most important religious building in the region, built in the 12th century by a monk from Cluny, Pedro de Osma, in Gothic style with some Romanesque influences. The interior has three naves of classical Gothic structure of French influence, but the decoration is Renaissance.  The grille of the main altar were forged by Nicolás Francés and the grand altarpiece is by Juan de Juni. Departure for Peñafiel, or Quintanilla or Pesquera, where we will visit some classical wineries, “Pago de Carraovejas” or “Pesquera” or “Vega Sicily.” Continue to Sacramenia, which houses one of the most important artistic heritages in the northern area of Segovia. Lying on a hillside that reaches a hill visible from great distances, its most important monuments are, without doubt, its Romanesque churches, like the Monastery of Saint Mary the Royal, proud Cistercian temple with the dimentions of a cathedral, the parish church of Saint Martin, Saint Marina and the hermitage of Saint Michael, perched on the top of a hill. Lunch based on typical Segovian roast. Continuation to Aranda de Duero. Free time in this dynamic city of commerce, that conserves a lovely Main Square (Plaza Mayor), a a street lined with galleries and, chiefly, the Church of Saint Mary, Isabeline in style, founded by The Catholic Monarchs, and whose ornately decorated façade was conceived as an altarpiece. Dinner and lodging.

Breakfast and departure for Pedraza. Free time to enjoy one of the lovliest towns of Castile, marvelously valued due to the restoration of its old houses with crests and its Main Square surrounded by arcade. Situated on a rocky protrusion, surrounded by walls that dominate the plain, it was an important stronghold in the period of the Reconquest. The sons of Francis I of France were prisoners in its castle after being defeated in Pavia by the armies of Carlos I of Castilla y Aragón. Continuation to Segovia, built in an eminently defensive setting. Lunch with runner beans and roast suckling pig (cochinillo). In the afternoon, tour of the city whose origins go back to the Celtic foundation of the 7th century B.C. Its strategic position attracted the Romans, who besieged the town, assaulted it and razed it in 80 B.C. Reconstructed shortly afterward, it became an important city in the Roman Empire. We will see the Roman aqueduct, without doubt the most svelt and best preserved of all those build during the Roman Empire, and whose construction is generally dated as from the 1st century B.C. We will visit the Alcázar, whose foundations were placed in the Arab period and was one of the favorite Residences of The kings of the Trastamara House, and, later inhabited by the Catholic Monarchs. After its restoration, today it has the air of a romantic castle, with well-defined battlements, pointed slate roofs and svelt towers. Continuation to Madrid. Arrival and END OF TRIP 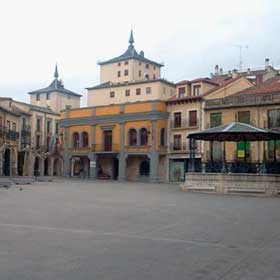 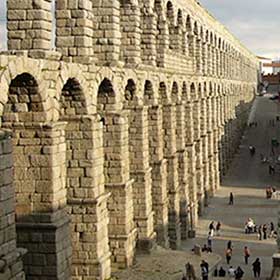