ROUTE OF THE CATHARS

DAY 1 MADRID- FIGUERAS – TOULOUSE Meeting in Atocha Gate Station to leave on an AVE train to Figueras. Arrival to the train station and meeting with the accompanying guide. Tour of the Dalí Museum . Lunch. Continuation to Toulouse. Dinner and lodging.

DAY 2 TOULOUSE – LAVAUR – ALBI – TOULOUSE Breakfast. Tour of Toulouse, in which we will visit the inside of the Cathedral of Saint Sernin and the Church of the Jacobins. Continuation to Lavaur: in the southern façade of the Cathedral of Saint Alain, there is an old bell tower that boasts an enigmatic figure, the jacquemart, a wooden figure that strikes the bell. Its estrange name evokes the “jacques”. Departure for Albi. Lunch. Visit of the inside of the Cathedral. When Montsegur fell and the fire of combat was extinguished, the Catholic Church managed to reshape itself as it was able in Occitan territory. Thus, the Cathedral, built in red brick, from afar seems more like a fortress than a sacred building. Such was the message that the Catholic clergy wanted to transmit to its flock: Cathedral and fortress, prayer and power, sermon and threat. Free time in order to visit the Episcopal Palace from the 12th century, which houses the Toulouse-Lautrec Museum (Visit not incluided). Return to Toulouse. Dinner and lodging.

DAY 3 TOULOUSE – PAMIERS – FOIX – MONTSEGUR –MIREPOIX – LIMOUX – ST HILAIRE – CARCASSONNE Breakfast and departure for Pamiers. We will visit Saint Antonin, built in the 12TH CENTURY and of which little more than the main portico and part of the fortified bell tower remain. Continuation to Foix. Amidst the monumental complex, the Gothic Chuch of Saint Volusianus stands out. Its apse is almost situated on the banks of the Ariege River. Continue to Montsegur. The historians are conclusive: the castle has nothing to do with the old Cathar castle, in the Plas dels Cremats, where the ascent to castle begins. The castle is a monolith that imitates the heretical funerary estelas. It reminds that in that place only seven hundred years ago they lighted the pyre that consumed the Cathars who did not deny their faith. Continuation to Mirepoix, of whose castle remain some traces such as an access gate to the city and chiefly the Main Square, composed of buildings from the 13th to the 15th centuries. Lunch en route. Crossing Limoux we arrive in St Hilaire, to begin the Tour of the fortified Benedictine abbey. The Cloister is notable due to its trapezoidal shape and for the capitals of the columns. The Gothic Church of Notre Dame of Marseille, in immediate surroundings, houses a Black Virgin and in the middle of the choir there is a well of water, reputed to cure all illnesses. Arrival in Carcassonne. Dinner and lodging.

DAY 4 CARCASSONE –CAUNES MINERVOIS – CARCASSONE Breakfast and Tour of CARCASSONE with its double walled area. We will visit the Cathedral, restored in the 19th century, the Castle with eight tall towers and the Medieval Museum. Free time. Lunch and departure for CAUNES-MINERVOIS. Tour of the Abbey. The foundation of the Benedictine Abbey, work of Anian, dates from the end of the 7th century. During the crusade against the Albigensians, the abbott of Caunes received several times the representatives of the Pope who had come to preach Catholic orthodoxy. In 1227, Peter Isarn, Cathar Bishop of Carcasses was burned in Caunes. Return to CARCASSONE. Dinner and lodging.

DAY 5 CARCASONNE – LAGRASSE – VILLEROUGE TERMENÈS -FONTFROIDE- FIGUERAS – MADRID Breakfast and departure for LAGRASSE, one of the most beautiful towns in France. Tour of the interior of the Benedictine abbey that goes back to the end of the 7th century. Continuation to VILLEROUGE TERMENÈS, connected to the Cathars, for having been the scenery for the cremation of Guillem Belabiste, considered the last “perfect”. Adiovisual tour of the castle. Continuation to FONTFROIDE. Surprisingly well conserved, it was an orthodox Catholic bastion opposing Catharism and its abbey is considered one of the largest Cistercian Abbeys in Europe. Tour of the Abbey and Lunch. Departure for FIGUERAS to take the return AVE to Madrid. Arrival and END OF TRIP 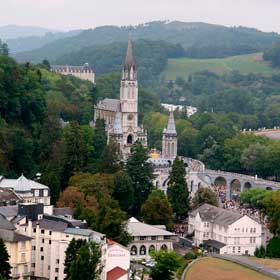