DAY 1 MADRID -ROME-ASSISI Meeting in the airport at the indicated time to take a flight to Rome. Arrival and tranfer in coach to Assisi. Dinner and lodging.

DAY 2 ASSISI – THE VERNA – ASSISI Breakfast. Departure for the Verna, place where In 1224 Saint Francis received the stigmata that he maintained in secret during his life, including to his followers. Lunch. Return to Assisi. Free time. Dinner and lodging.

DAY 4 ASSISI – ORVIETO – RIETI Breakfast. Departure for Orvieto, Medieval city where the miracle took place that resulted in the religious celebration of Corpus Christi. Lunch. Continuation to Rieti, the walled city called “The Holy Valley” due to the memories of Saint Francis in its province. Dinner and lodging

DAY 5 RIETI-LA FORESTA-GRECCIO-FONTE COLOMBO-ROME Breakfast. Departure for the Shrine of Santa Maria de la Foresta, where Saint Francis was a guest until he moved to Rieti. It was here, in La Foresta, where the miracle of the vineyard happened, which, despite having been destroyed by the multitude that wanted to see the Saint, today produces abundant and good wine. Continuation to Greccio, town on the side of Mount Lacerone with another Franciscan shrine where the Saint, in 1223, celebrated the Christma mass between an ox and a mule, thus giving origin to the tradition of the nativity scene. Lunch. Continuation to Fonte Colombo. Tour of this shrine where the Franciscan Rule was written and in addition where Saint Francis suffered a painful eye operation. Arrival in Rome. Dinner and lodging.

DAY 6 ROME Breakfast. In the morning we will take a panoramic tour of the city: Venice Square, Avenue of the Imperial Fora, the Colosseum, the most beautiful Roman Amphitheater, the Arch of Constantine. Lunch. Afternoon tour of Christian Rome: Basilica of Saint John Lateran, Saint Mary Major and Catacombs. Return to the hotel. Dinner and lodging.

DAY 7 ROME Breakfast. Transfer to the Vatican in order to visit The Vatican Museum, the Sistine Chapel and the Basilica of Saint Peter. Lunch. Afternoon free for personal activities. Dinner and lodging.

DAY 8 ROME – MADRID Breakfast. Transfer at the indicated time to the airport to embark on the return flight to Madrid. Arrival and END OF TRIP 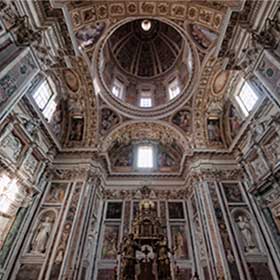