Meeting in Barajas Airport at the indicated time, to leave on a flight to Rio de Janeiro. Arrival and transfer to the hotel. Time to get settled and departure for Buffet dinner (“feijoada”). Return to the hotel. Lodging.

Breakfast. In the morning we will visit one of the icons of the “Marvelous City”, the Christ of the Corcovado (Hunchback). The image that presides over the city will overwhelm us with its size, and the views of Rio are spectacular without doubt. Lunch and afternoon tour of the Sugar Loaf, from where can be seen one of the most beautiful panoramas of the world, the neighborhoods in the South, in the North, the center of the city and the entire Bay of Guanabara and the Corcovado. Dinner and lodging.

Breakfast. Transfer to the airport to depart for Buenos Aires. Arrival and transfer to the hotel. Transfer to restaurant: Lunch and beginning of the panoramic tour of the city with the sumptious neighborhoods of the Recoleta and Palermo, with the beauty of its parks and buildings, the Colón Theater, the Plaza de Mayo, the Cathedral, the typical Avenida de Mayo, and many others buildings of special architectonic, historic and cultural value. We will finish with a stroll through the old San Telmo, the Caminito en la Boca Street and the recently recycled area of Madero Harbor. In the evening, Dinner with tango show. Lodging

Breakfast. Departure to take an excursion to Tigre and Delta of the Paraná, which will allow us to get to know the Northern part of Buenos Aires and the atractive natural area of the Delta of the Paraná River, Martínez, San Isidro, San Fernando, Tigre. Navegation through the canals. Lunch. Return to Buenos Aires. Formal dinner. Lodging.

Breakfast. Full day excursion with lunch at the estancia (ranch) “La Cina Cina” or “Santa Susana,” where we will have the opportunity to get to know the customs and the ways of life of the country man from the Argentine Pampa, the gauchos. Dinner in restaurant. Lodging.

Breakfast. Transfer at the scheduled time to the airport of Buenos Aires to depart for Iguazú. Arrival to the Natural Park, which has one of the largest forest reserves in South America and whose mayor attracion are the Falls, declared World Heritage Site by UNESCO, and that we will be able to admire through the gangways. Lunch. Tour of the Brazilian side, which has an area of 185,000 hectares, full of indescribable surprises, with marvelous paths that lead to places like the Salto del Macuco (Macuco Falls), Pozo Negro (Black Well) and Usina San Juan (Saint John Plant). Dinner and lodging.

Full board. Departure to take a tour of the Argentine side, which extends for 55.000 hectares and is markedas one of the natural regions with the greatest richness of flora and fauna in Argentina, the Selva Misionera. The great diversity of environments allows the existence of a great variety of animal and vegetable life that can be groups aaccording to the area that they occupy. The water falls themselves house vegetation that is especially adapted to this constant humidity and the terrible strikes of the water. The falls, located 23 Km from the mouth of the Iguazú River reach heights between 50 and 80 meters and forman an arc of 3 Km. The area of Brasil are about 600 meters. Its division is the Salto Unión, which forms the grandiose Garganta del Diablo (Devil’s Throat). There are 275 falls, among which include the Mitre, Belgrano, Rivadavia, three Mosqueteers, San Martín, Bozzetti, Two Sisters and the already mentioned Garganta del Diablo. Lodging.

Breakfast. Free time until the time of the Tranfer to the airport to embark on a flight to Buenos Aires. Arrival and connection to the flight to Madrid. Night on board.

Arrival to Madrid-Barajas Airport and END OF TRIP. 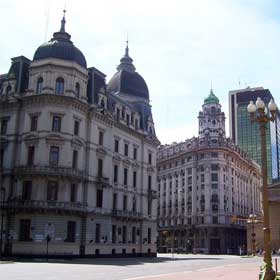 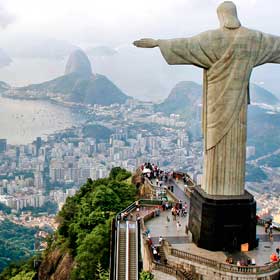 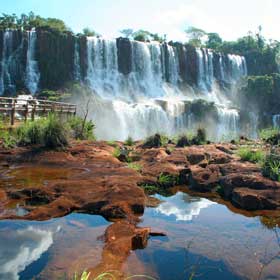