Meeting in Madrid-Barajas Airport Terminal for billing procedures and boarding a regular flight to Lima with departure at 12.35 am  (night on board)

5:50 A.M. Arrival to the airport of Lima. Assistance in the airport and transfer to the chosen hotel. Lima, more than 400 years ago was called City of the kings by the conquistador Francisco Pizarro. Today, that same city which rose above the lands of the indigenous Chief Taulichusco, is a metropolis that conserves with pride its colonial convents and mansions, symbols of its aged and noble tradition. Check in the hotel and breakfast. Free time to rest. Lunch. Panoramic tour of Colonial Lima and Tour of the Casa Aliaga, colonial mansion, one of the best conserved in the Americas, inhabited by the same family from 1535. Return to the hotel. Departure to attend a formal dinner  in a local restaurant with 2 hours of dancing, DJ and open bar. Return to the hotel. Lodging.

Breakfast in the hotel. Tour of the bohemian district of Ravine, with its small saure, places with a lot of night life and its traditional Bridge of Sighs. Departure for the Pachacamac: visit including the Inca Temple. Pachamac is one of the largest and most important archaeological sites in Perú. In its time it was most consulted huaca (oracle) in the Andean world, leaving a profound footprint that survives to ours days. Transfer to an Hacienda for Lunch with a horse exhibition. Return to Lima. Time for purchases in the Petit Thouars Street. Tranfer to eat dinner in the Huaca Pucllana. Located facing the archaeological complex of the same name that was an oracle whose antiquity is calculated to be 2000 years old. Return to the hotel. Lodging.

Breakfast. Transfer to the airport at the scheduled time  to leave on a flight to Cuzco, word that in quechua means belly button of the universe, for this city, which was the capital of the Incan Empire, was the starting point of the road network that lead ot each of the four suyos (o regions) that formed the four parts of the world, according to the Andean cosmovision. Transfer to the Sacred Valley. Lunch in Pachamanca and theater of the gods. Pachamanca in a typical meal of Perú base don cooknig the food by the heat of hot stones. They are buring in the groud and are cooked with stones charring the different meat: beef, pork, chicken and lamb; and the vegetables: potatoes, sweet potatoes, beans and choclos (corn/maize). The flavor that the hot earth and the condiments give to these products is really special. Transfer to the hotel in the Sacred Valley. Dinner and lodging.

Today will be an unforgettable day because we will visit one of the 7 marvels of the world, Machu Picchu, located in the subtropical area of Cuzco at 2350 m. Early breakfast and transfer to the train station of Ollantaytambo. Departure in train across the Sacred Valley of the Incas to Aguas Calientes. Ascent by coach to Machu Pichu. Arrival to Machu Pichu “The Lost City of the Incas”, discovered by the US explorer Hiram Bingham in 1911. Visit for 2 hours and return to Aguas Calientes. Lunch in restaurant and return by train to Ollantaytambo. Transfer to the hotel. Dinner and lodging

Breakfast. Departure an exciting boating activity on the river: Arrival and equipment pick up, orientation talk and boating on the river. Disembarkation, time to dry off and get dressed and departure for Pisac. Free time in the market of Pisac: Indigenous fair where lovely textile pieces, sweaters, ponchos, purses, etc., shine, as well as the ceramic crafts with reproductions of Incan archaeological pieces, the queros (ceremonial vases), necklaces, etc. Indigenous artisans and merchants come to this fair from many towns to sell their products.  Lunch and departure fo

Breakfast. Guided tour including the Fortress of Sacsayhuaman, one of the most notable Incan buildings, the amphitheater of Kenko, the red fortress of Puca Pucara and the fountains of Tambomachay whose aqueducts continue providing crystalline water to the place. Lunch in a local restaurant. In the afternoon we will continue with our visit. We will visit the famous Cathedral and its fine works cabinetmaking, sofisticated altars and hundreds of oil paintings belonging to the Cuzco School (Escuela Cuzqueña) from the 16th century. We will continue  to discover the cultural heritage of Cuzco in the Temple of the Sun, or Korikancha, to admire the Inca masonry work. Dinner in a local restaurant. Lodging

Breakfast in the hotel. Departure in coach for the Raya, the highest point between Cuzco and Puno. Visiting en route Andahuillas. Midmorning ascent on board the train Andean Explorer of the Orient Express. On board they serve an exquisite neo-Andean gourmet lunch. They will also serve tea in the afternoon. During the tour they offer a variety of entertainment like live music, fashion shows, tasting of Pisco Sour and typical dances. Finishing the tour with a delicious Bellini. 6:00 P.M. disembarking from the train in Puno. Puno, city that captivates and bewitches with the strange magnetism that seems to spring from its hills, its lake with the appearance of a sea and its people, descendents from the Aymaras, the vigorous people that commanded the heights. Before the expansion of the Incan Empire, the area that today we know as Puno, located in the extreme south of the Perú, was dominated by the Tiahuanaco culture, the highest expression of Aymara development, according to what the archaeological remains found in the area tell us. Dinner and lodging.

Breakfast. Departure to take a tour of the Uros Islands. The islands are found in the Bay of Puno, and there are approximately 20. Each is inhabited by 3 to 10 uroaymaras families, who construct and roof their houses with reed mats, even if there are some that have replaced their roofs. The Uros call themself kotsuña, “The Lake People”, and its origins go back to times before the Incas. They maintain the tradition of artisanal fishing, especially carachi and pejerrey, as well as the hunting of wild fowl. The men are able hombres are skilled drivers of the reed boats and the women are expert weavers. The cold and dry climate characteristic of the region are attenuated in the area thanks to the action of the masses of wáter that constantly evaporate. Return to the hotel: Lunch. Tranfer to Juliaca to leave on a flight to Lima. Connection to  the flight to Madrid – Night on board.

Arrival to Madrid-Barajas Airport and  END OF TRIP 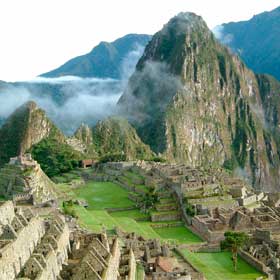 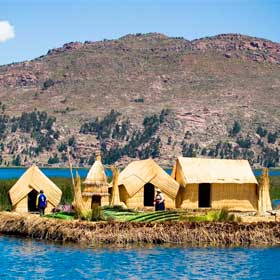 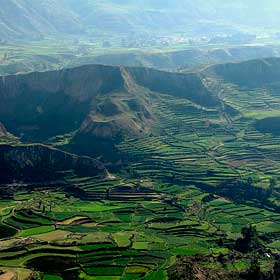