Departure at the scheduled time for Pamplona. Stop in Tudela to get to know the city of King Sancho VII the Strong, pointing out its magnificent cathedral from the ends of the 12th century, declared National Monument. Lunch. Free time and continue to Pamplona. Dinner and lodging.

Breakfast and departure for Sos del Rey Católico, called that because it was here that King Fernando the Catholic was born in 1452. Tour of this fascinating city that arose in the 10th century with a defensive advance of the Kingdom of Navarra against Muslim Spain. The most suggestive monument is the totality of the city center with its stone houses, eaves, frontispieces with segmented shields, Gothic and Renaissance windoss, and with its narrow cobblestone streets. After the visit continue to Leire. Lunch and Tour of the Monastery of the Holy Savior of Leyre, where we will take a guided tour of the Crypt, Courtyard of the Inn, Church and “Porta Speciosa”. Continuation to Javier, where we will get to know the castle that in the 16th century was the property of the father of Saint Francis Xavier, and in which was born Saint Francis Javier, cofounder, along with San Ignacio de Loyola, of the Society of Jesus. Return to the hotel. Dinner and lodging.

Breakfast and departure for Olite where we make a beautiful visit, roaming the narrow streets to discover the great  religious and civil Historic Monumental Groupings of this city. We will point out the Royal Palace, the Church of Royal Saint Mary and the Church of Saint Peter the Apostle. Continuation to Zaragoza. Lunch. Free time and Holy Mass in the Basilica of the Pilar. Continuation to Madrid.  Arrival and END OF TRIP. 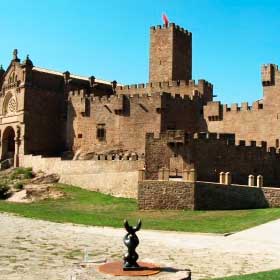