Meeting at the specified time and place with departure from Madrid for Coca, where we point out its castle, contructed on orders from D. Alonso de Fonseca after receiving permission from King Juan II of Castile in the year 1453. The exterior view of the castle is extremely beautiful. As opposed to Christian castles, with smooth walls, regular and monochromatic blocks, exclusively of defensive value, here we can admire the triumph of fantasy, imagination and dreams. Its originality is such that it is considered the finest exponent of Christian military Mudéjar. Continuation of the trip to Cuellar, the Mudéjar village that offers the visitor the monumental legacy of a thousand-year history. The path through its streets puts us in contact with an urban frame presided over by the Alburquerques Castle, its church towers, the vestiges of its wall. Departure for Turégano, a town with numerous works of art in the form of monuments and buildings. The Medieval Castle, in whose interior is found the Church of Saint Michael, stands out among them, and its dominates the whole town. The Main Square, with its porticos and houses, is another of its nerve centeres, as it is the place where markets, fairs and processions are celebrated. Lunch. Continuation of the trip to Pedraza, small village situated in the Segovian foothills. Incomparable setting declared Monumental complex in 1951. We will find here an excellent place to stroll, to shop, to delight in its exquisite gastronomy in a privileged surrounding full of quietude and loaded with history. We highlight its Main Square, one of the Lovliest squares in Castile. Constructed with materiales from various periods, its unmateched enchantment gives it, however, a surprising beauty. At the same time we highlight its Castle. A fortress from the 12th century, the current appearance is the result of a reconstruction realized in the 16th century by the Dukes of Frías, Constables of Castile. Return to Madrid and END OF TRIP. 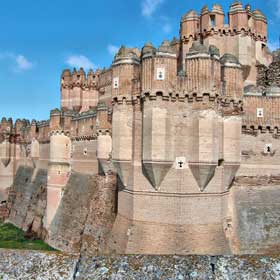 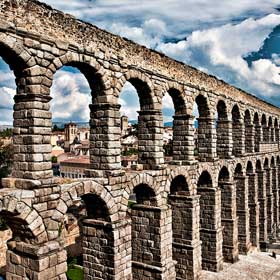