Departure from Madrid to Marrakech. Transfer to the hotel. Lunch. Check-in private salon, welcome tea and room distribution. Depending on the arrival time, we will take a panoramic tour of the Marrakech Palmgrove. Group dinner at the edge of the hotel pool or a private one.

Breakfast buffet and departure to take a full day tour of Marrakech.  Day dedicated to a tour of the Imperial city, also called the “Red City”.  Tour of the Menara with its garden of olive trees and its tank which used to supply the the city with water, the outside of the Koutoubia with its 77 m minaret visible from practically the entire city and considered twin sister of the Giralda de Seville. The Saadianas Tombs that date from the 15th century with its cold and mute beauty. The Bay Palace, sumptuous dwelling constructed at the end of the 19th century by hundreds of artisans brought from Fez and Seat of the Grand Visir Bahmad.  Lunch in restaurant. After lunch, continuation with the tour of the infinite souqs with lively colors in the old medina, where in its heart different artisans were organized in neighborhoods by guilds, the blacksmiths, the dye workers, the leather merchants, the spice merchants where a thousand perfumes are mixed, the artisans and wood merchants, the tailors and sellers of traditional clothes, etc., where the art of the bartering is practiced with a smile on the lips around a cup of mint tea. We will return to the Djemaa el Fna Square, heart viviente and theater de Marrakech, through a laberinth of alleyways protected from the sun by the most surprising structures. Return to the hotel.  Dinner in the hotel.

Breakfast and departure in order to take an excursion to Essaouira. Day dedicated to discovering this lovely coastal city of the Atlantic and fishing port; called “Mogador” in the past. with an important historic legacy due to the passing of numerous peoples, e.g. Romans, Portugueses, Arabs and Berbers.  There is a Portuguese fortress from the 15th century, and it has a Medina with artisans work the wood of the argan tree, exclusive to this region and from whose fruit is extracted a very rich oil used in breakfasts and today in numerous cosmetic products by the best brands. Guided tour of the city. Lunch based on fish in a restaurant in Essaouira. Free time to stroll through the medina and return to Marrakech. Dinner in the hotel. Lodging

Breakfast. Half day excursion in the morning to the Ourika Valley: the Ourika River irrigates with its clear water a valley whose terraced fields, always green, grant singularity to a landscape dotted with small Berber towns of adobe houses. Return to the hotel. Lunch in the hotel. Technical meeting in the afternoon. 8:00 P.M. departure for the Formal dinner in the restaurant “Chez Ali” with Show. Situated in the Marrakech Palmgrove, the grandeur of the complex impress those who visit it. Dinner will be served inthe different Jaimas while we enjoy the folklore from the different regions of Morocco. As a colophon to the dinner, we will enjoy the skill of the Berber horsemen and the famous Gun Powder Run. We will enjoy, for two hours, as dance with DJ, baile and open bar. Return to the hotel.  For this dinner, we offer as a business gift a tunic and turban for the mne and a hankerchief for the women.

Breakfast buffet. Transfer to the airport to depart for Madrid. END OF TRIP 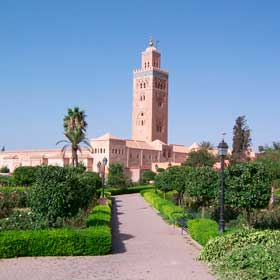 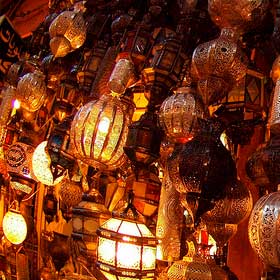