DAY 1 MADRID – TRIPOLI At the designated time, meeting in the airport to leave on a flight to Tripoli. Assistance in the airport and transfer to the city. Later, brief panoramic tour of the ancient city of Oea, originally established as one of the major mercantile ports for the Phoenician sailors in the last millennium before Christ. Continuation to the hotel, dinner and lodging.

DAY 2 TRIPOLI – SABRATHA – ZLITEN Breakfast. Departure for the Roman ruins of Sabratha, founded by the Phoenicians in the 5th century B.C, conquered later by the Carthaginians, occupied by the Romans from the 1st century B.C. until the 3rd century A.D., and later by the Byzantines until the 6th century A.D. after the Punic Wars. Sabratha hosts one of the best preserved theaters in Libya, whose days of splendor coincide with the reign of the emperors Antoninus Pius, Marcus Aurelius and Commodus. In addition to the visit of the theater, we can enjoy the Palace of Justice (Basilica of Apuleius of Madora), The temples of the Capitolium, the temple of Isis, the Justinian basilica with its mosaic floors, etc. We will also visit its classical museum with its magnificent mosaics and frescos. Lunch and continuation to Zliten. Arrival to the hotel, Dinner and lodging.

DAY 3 ZLITEN – LEPTIS MAGNA – SIRT Breakfast and departure for Leptis Magna, to visit one of the most important and best preserved Roman archaeological sites in the world. The city is really a Roman site, founded by the Phoenicians, that flourished in the Roman period, although later it was occupied by the Byzantines. It is also the birthplace of the emperor Septimius Severus. The city is called Leptis Magna to distinguish it from Leptis Parva, in Sousse (Tunisia). We will visit the museum, The triumphal arches of Severus, Trajan and Tiberius, its theater and the Basilica, the Forum decorated with heads of Medusa, the baths with their impressives frescos, the temples of Jupiter, Rome and Augustus, Liber Pater and Serapis, the Punic market, the Port, etc. Lunch in restaurant and continuation to visit the Circus and the enormous amphitheater. Later, we will continue on to the city of Sirt, city of the Coronel Ghaddafi. Transfer to the hotel, dinner and lodging.

DAY 4 SIRT – SULTAN – BENGHAZI Breakfast and early departure for Sultan, to visit the small museum in which are found ancient islamic remains (vessels, coins and objects of daily use), found in the city. Next to the museum, is found the arch constructed by the Italians to commemorate the way in which the borders between Cyrenaicans and Carthaginians were drawn. Lunch in a local restaurant and continuation to Benghazi, the second city largest in Libya, established as Hesperides by the Greeks and later as Berenice. The city suffered great attacks during the Second World War. We will take a panoramic tour of the city, transfer to the hotel, dinner and lodging.

DAY 5 BENGHAZI – PTOLEMAIDA – QASER LYBIA – AL BAYDHA Breakfast. Departure to visit the great Greco-Roman settlement of Ptolemaida, originally established by the Greeks as a port for the interior city of Barca and that developed under the Eqyptian dynasty of Ptolemais. It has he largest cisterns in North of Africa, and an important Roman town with impressives mosaics now gathered in the museum that we will visit after the panoramic tour of Ptolemaida. Lunch in a local restaurant and continuation to the museum of Qaser Lybia, which has some of the best mosaic panels in the country, taken from a nearby Church that dates from the 6th century A.D. After finishing the visit, continuation to Al-Bayda, the largest cityin the area of the Green Mountain. Transfer to the hotel, dinner and lodging.

DAY 6 AL BAYDHA – CYRENE – APOLLONIA – AL BAYDHA Breakfast. Departure for Cyrene, the oldest city in the Cirenaican region. Cyrene was founded by the Greeks of Thera (today Santorini) in the 631 B.C. and soon it became the most important city in the region, growing rapidly as the Greeks settled. It was constructed on two levels of the plateau of the Green Mountain. The lowest level houses the great temple of Apollo, next to spring of Apollo. We can see other monuments, such as theaters, a large gymnasium, an agora and some well preserved baths. After the arrival of the Romans in the 1st century B.C., public Roman buildings crowded the city and its architectural influence is seen in the buildings. We can also visit the museum of Cyrene that houses works of art from the archaic period and Greek and Roman pieces. Lunch in a local restaurant and transfer to Apollonia, that in other times was the port of Cyrene. The place is partially excavated and contains Byzantine churches constructed with recycled materials and a beautiful Greek Theater next to the sea. Continuation to Al-Bayda, dinner and lodging.

DAY 7 AL BAYDHA – RAS HILAL – ATHROUN – SNAIBAT AL AWAILA – WADI ALKUF – BENGHAZI Breakfast and departure for Ras Hilal and Athroun, where we will be able to visit some magnificent Byzantine churches that date from the 6th century A.D. Then, we will continue to the Greek tombs of Snaibat Al Awaila, and later we will leave to see the Lybian temple of Slontah, which dates from the Greek period and has local influence. The temple has sacrificial and ritual scenes. We will take a small stop in Wadi Al Kuf, where we will have some magnificent views of the Green Mountain (Jabel al Akhdher), and in addition we will be able to see the caves where the national hero Omar Mukhtar had his bases to fight against the Italian occupation. Lunch in the area and continuation to Benghazi. Dinner in a local restaurant and lodging.

DAY 8 BENGHAZI – TRIPOLI – MADRID Breakfast. Departure for the Airport of Benghazi to embark on the domestic flight to Tripoli and connection with the flight to Madrid. END OF TRIP 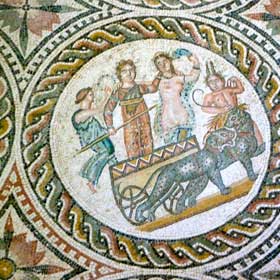 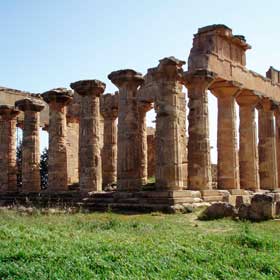 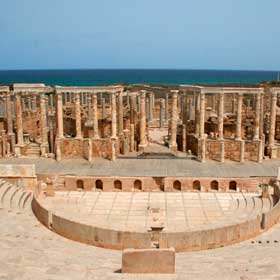