Arrival to the airport of Rome and transfer to the hotel. Panoramic tour of the “The Eternal City”, where we can contemplate, the Plaza de Venice, with the impressive monument in white marble a Victor Manuel II, Capitoline Hill, the Avenue of the Imperial Fora, the Colosseum, considered the most beautiful Roman amphitheaterand where the journalist Joe Bradley (Gregory Peck) brought the gorgeous Princess Anna (Audrey Hepburn), in the film by William Wyler “Roman Holiday” (1953), the Roman Forum, where The protagonists meet for the first time, she reclining on one of the stone benches reciting poems. Lunch. Continuation of the visit, the Piazza Navona, with the magnificent Bernini Fountains, the Piazza di Spagna and its famous staircase where the beautiful Audrey rested eating a typical Italian ice cream. The staircase, with 135 steps, leads to the Church of the Trinità dei Monti. We will also walk along the picturesque and narrow Via Margutta, which is found a few steps from the Piazza di Spagna. In this narrow street, at Number 51, was where the journalist Joe Bradley lived. Currently the street is full of art galleries and businesses where they sell all kinds of antiques and curious objects, but you can enter the interior courtyard of Via Margutta 51, still with trees that make an arch in las staircases and the balcony overlooking the exit. We will also see the famous Trevi Fountain. In it Gregory Peck tried to rob a camera from a littler girl in order to photograph the Princess while she was in the corner hair salón having her hair cut. Also Trevi Fountain is the scenery of the immortal bath of Anita Ekberg and Marcello Mastroianni in the masterpiece of Federico Fellini “La Dolce Vita” (1960). We will also pass by the Colonna Palace, from the 12th century, very Near Trevi Fountain. In “Roman Holiday” it was where the Princess offers a press conference in which bids farewell to Rome and thanks them for the experiences that she had. Dinner and lodging.

Breakfast. Morning tour of the Vatican Museum and the Sistine Chapel, masterpiece of Michelangelo. Then we will see the Sant’ Angelo Bridge.  At the foot of the bridge there is a pier that was a night discotheque, where in “Roman Holiday” the portagonists went to dance, and where the secret agents discover the Princess and try to detain her. This pier no longer exists, but it is an excellent place to admire the castle of Sant’Angelo and the Tiber River. Lunch. In the afternoon, continuation of the Tour of Rome. We will pass through Via Veneto, depicted by Fellini in ”La Dolce Vita” at the hands of Marcello Rubini, the journalist interpreted by Marcello Mastroianni, and his inseparable paparazzi photographer. The Doney Gran Caffé, at número 145, was one of the favorites of Fellini. The walk through Via Veneto will allow us to see its grand hotels like the Excelsior, where the actress who interpreted Anita Ekberg in “La Dolce Vita” stayed. We will also see the Agrippa Pantheon, known as the Pantheon of Rome the oldest religious building in Rome, in addition to being the best preserved. In the interior of the Pantheon are found the tombs of numerous kings of Italy and numerous works of art. The most famous person found buried in the Pantheon is the Renaissance painter and architect Rafael. In the plaza adjacent to the Pantheon is the Caffé Rocca, where the protagonists of “Roman Holiday” sat to admire the plaza while they drank (she, champagne, and he an iced coffee). Although the Caffé Rocca no longer exists, ther are numerous cafés and bars where you can sit to admire the spectacular plaza. Tour of the Bocca Della Verità, in the portico of the Church of Saint Mary in Cosmedín, a few steps from the Circo Máximo. Legend says that if you tell lies and place your hand on its mouth, it will bite you. It is an ancient sculpture in form of a giant disc a face with a mouth is represented. Audrey Hepburn and Gregory Peck placed there hands on it and he scared her pretending to having been bitten by the mouth. Dinner and lodging.

Breakfast. Morning tour of the Basilicas of Saint Paul Extramuros, which is, after Saint Peter, the Largest church in Rome. It rose in the first half of the 4th century by order of Emperor Constantine, in the place that tradition says was the tomb of the apóstol. Tour of the Basilica of Saint John Lateran, which was the main church and residence of the Popes from Emperor Constantine until the construction of Saint Peter, and Saint Mary Major, constructed between 1735 and 1743. Lunch. Tour of the Catacombs and Tour of the Trastevere, the only place in Rome that survived to the medieval period and mantains a strong local identity. Fellini introduces us in the Trastevere through his film “Rome” (1972), where the director himself interprets himself. In the film, Fellini depicts different Roman scenes from the poswar to the 70s. One of the scenes from “Rome” is the Augusto Restaurant, in the Piazza de Renzi. Dinner. After supper, just as Fellini proposes at the end of the film, we will take a nighttime walk through the illuminated fountains of Rome, Fontana delle Api, Fontana of the Tritone, Fontana de Moisés, in the Piazza San Bernardo and, surrounding the Quirinale Palace through a swarm of alleyways, to Trevi Fountain. Lodging.

Breakfast. Departure to visit the film studios “Cinecittá”, situated nine Km from the center of Rome, on Via Tuscolana. The studios were created in 1937, and mythical like “Quo Vadis”, “Ben Hur”, “Cleopatra” or “War and Paz” and large part of the neorrealista procutions by directors such as De Sicca, Rosellini, Fellini or Visconti were all filmed there. It is also the place where the greatest actresses and actors acted: Elizabeth Taylor, Audrey Hepburn, Sofia Loren, ClauDAY Cardinale, Ana Magnani, Anita Eckberg, Deborah Kerr, Charlton Heston, Richard Burton, Marcelo Mastroiani, Robert Taylor, Peter Ustinov and a long etcétera. But the “factory of dreams” also had its nightmares, as it was an arms depot and concentration camp during the Second World War. Lunch. Departure for Siena. Free time in this city, perfect example of a medieval city with its characteristic ochre color. Prominent is the Cathedral, the oldest in Italy, and the Piazza del Campo, where every year they celebrate the famous horse race of the Palio.  Continuation to Florence. Transfer to the hotel. Dinner and lodging.

Breakfast. Panoramic tour of this lovely city, birthplace of the Italian Renaissance, in which we highlight the Piazza della Santa Croce, the Piazza della Signoría and the Arno River, three emblematic places where the scenes from the movie “A Room with a View” (1985) were filmed, the Palazzio Vecchio, the famous Ponte Vecchio, the Cathedral of Santa Maria di Fiori with its grandiose dome by Brunelleschi, the Baptistery where the Doors of Paradise impress, Giotto’s Campanile. We will also visit the oldest Pharmacy in Europe “Santa Maria Novella”, known for the cinephiles for remembering that dinner in the film Hannibal, in which the spectator can see Hannibal Lecter entering to buy a potion there. Lunch. Departure to take an excursion to Arezzo, a city rich in Art and history. The city conserves unique pieces of medieval art such as the “Christ” by Cimabue where, for the first time in the history of medieval painting, they manage to give movement and perspective to the figures. Arezzo also conserves paintings and frescos from other greats such as Piero della Francesca. Also in Arezzo we find the House of Francisco Petrarca who, with Dante and Bocaccio, is considered one of the fathers of the Italian language. The city has and elegant aesthetic of a city halfway between the Middle Ages and the Renaissance. It conserves the square called Piazza Grande, where several monuments of the two historic periods coexist in perfect harmony. And it was in this beautiful plaza where Roberto Benigni pursues his “principessa” in the mythical film “Life is beautiful” (1997). Many of the scenes were filmed in this city, and, in fact in one of the buildings of the square there is a panel the on which they indicate the places in Arezzo where they filmed the different scenes of the unforgettable film. Return to Florence. Dinner and lodging.

Breakfast. Departure for Venice. Lunch. Transfer to Tronchetto and private vaporetto to San Marco. Panoramic tour of Venice, known as the Pearl of the Adriatic, where we can contemplate St. Mark’s Square and Basilica, the Campanile, the Ducal Palace, the Bridge of Sighs, the Rialto Bridge, etc… places where we can recomember various cinematographic works like “Casanova” or “Morir de Amor”. Transfer to the hotel. Dinner and lodging.

Full board. Departure for the island of Lido, where they celebrate, in its Conference Center, the International Film Festival of Venice. The Lido is a famous center of tourism and spas from the end of the 19th century, and we can admire its elegante towns and hotels, the tree-lined streets and the beaches facing buildings like the Casino of Venice, the Palazzo del Cinema or the Hotel Excelsior. The Hotel des Bains is the scenery in which the novella “Death in Venice”, by Thomas Mann, takes place and where Luchino Visconti filmed, in 1971, the movie of the same name. In Lido we will be able to see the Gran Víale Santa María Elisabetta, a street that is 700 meters long full of hotels and stores, and contemplate, in the neighborhood of San Nicolo, in the Northern part, the Monastery and the Church of Saint Nicolo, of the year 1040, and the Jewish Cementery from 1386. Lodging. 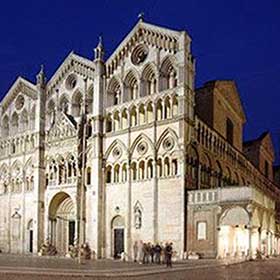 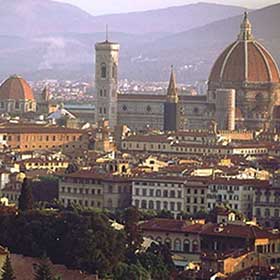 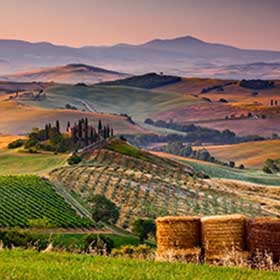 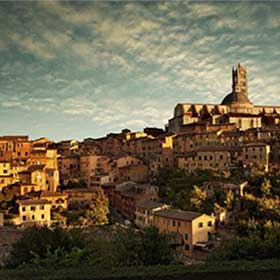