Meet at the agreed upon time in order to leave by coach for Cordoba. Free time and Lunch. Continuation of the trip to Seville. Free time in THIS monumental and colorful city in which we highlight The Cathedral, the Plaza de España, Maria Luisa Park, the neighborhood of Santa Cruz…Departure for Matalascañas, one of the tourist nuclei on the coast, very near the capital of Huelva. All kinds of aquatic and nautical sports can be played on its beaches. Dinner and lodging.

Breakfast and departure for Jabugo.  In the North of the province of Huelva, in heart of the Sierra de Aracena and Picos de Aroche Natural Park, lies the town of Jabugo. The town is surrounded by a forest of oaks, cork and chestnuts. It is located 658 meters above sea level, and it has an average anual rainfall of 1,000 l/m2 and an average annual temperature of approximately 14 C, making its climate one of the influential factors in the elaboration of meat products, especially Jabugo ham. Tour of a ham dryer. Continuation to Aracena, seated in the mountains of the same name, a wild and steep setting that encloses more than a few treasures. Tour of  the Grotto of the Marvels, a beautiful cave with stalactytes and a large subterranean lake. Lunch. Departure for Huelva. Afternoon free and continue to Palos de la Frontera, birthplace of the Discovery of America and the Monastery of the Rábida, historical cultural heritage. Its building goes back to the transition from the 15th into the 16th centuries, although it was constructed over the ruins of an Almohade building: the small Rábita, whose name has survived. In the Monastery we can admire the Church, one of its oldest parts, from the end of the 13th century or the beginning of the 14th century and in Gothic Mudéjar style. Return to the hotel.  Dinner and lodging.

Breakfast. We begin our visit of the National Park of Doñana in the early hours of the morning in special all-terrain vehicles. We will take approximately 4 hrs. to get to know the National Park of Doñana, the largest in Spain and one of the most important in Europe.  Its principal value resides in the extraordinary richness of the fauna that it harbors, fundamental stop in the Eurasia-Africa migratory routes and breeding area for many species. This fabulous richness is due to is piveleged climatic conditions and to is exceptional geographic location.  Another basic reason is the existence of three large environmental systems: Moving Beaches and Dunes (with a length of 20 km along the coast and up to 6 km wide), Boundary Area (covered with dense shrub and tree species, of both the Mediterranean and the Atlantic type), and the Marshes (the most important and extensive ecosytem with diverse diverse species of acuatic birds). Continuation to El Rocío and Almonte to visit the Virgin of El Rocío. Lunch. The village of El Rocío belongs tol municipality of Almonte, which is about 15 km away. White houses and dirt streets presided over by the Shrine of the Virgin of El Rocío make up the scenery that at Pentecost overflows with people and bubbling of faith.  On the Costa de la Luz, the town of Almonte lives between the countryside of the Huelvan county and the Betic marshes, offering great tourist interest as much as for its infrastrucutres as for its natural value. The town boasts, many examples of baroque constructions that survive, in addition to a wide variety of buildings of architectural interesest, such as Town Hall, which was a Dominican Convent, etc. Return to Matalascañas. Dinner and lodging.

Breakfast and departure for Bailen and Almagro. Stop for Lunch and free time. Continuation of the journey to Madrid. and END OF SERVICES. 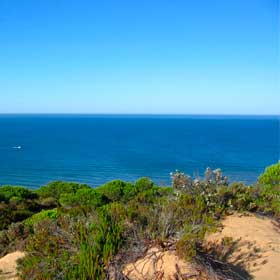 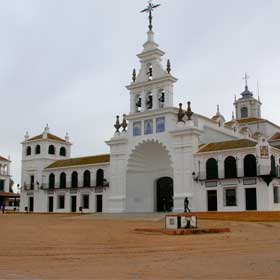