DAY 1 MADRID – TEL AVIV Arrival to the airport of Tel Aviv at 4:00 A.M.. Assistance with customs procedures and transfer to the hotel in Tel Aviv.

DAY 2 TEL AVIV – TIBERIAS Breakfast and remainder of the morning free. Lunch and afternoon departure for Tiberias. Arrival to the hotel, dinner and lodging.

DAY 3 TIBERIAS – ACRE – HAIFA-CESAREA – NAZARETH – TIBERIAS Breakfast in the hotel. Departure for the west to arrive in Acre and get to know the ancient crusade fortress. Afterward we will continue on to the city of Haifa, on Mount Carmel, to visit the Stella Maris Church, first and principal shrine of Our Lady of Mount Carmel in the world, as well as the Grotto of the Prophet Elijah. Then we will take a tour of a city including the temple Bahai and the Persian gardens. Lunch. We will continue our visit in the Roman ruins of Cesarea and site of the baptism of the centurion Cornelius. Continuation to Nazareth to visit the Basilica of the Annunciation, the Carpentry of Saint Joseph and the Fountain of the Virgin. Dinner and lodging.

DAY 4 TIBERIAS – JERASH- PETRA Breakfast and departure for the Jordanian border, crossing on the Sheik Hussein Bridge. Border procedures and change in coach. Departure for Petra with a stop in Jerash, one of the best conserved Roman cities in the world. Lunch. Continuation of the viaje, arrival in Petra, transfer to the hotel, Dinner and lodging.

DAY 5 PETRA- AMMAN Breakfast in the hotel. Tour of Petra, the Pink City, a mysterious place constructed by the Nabataeans among the rocks. We will visit its most famous image, the Treasury, as well as the Roman Theather and the Royal Tombs. Lunch. In the afternoon, continuation of the trip to Amman, capital of Jordan, where we will take a panoramic tour. Dinner and lodging.

DAY 6 AMMAN – MOUNT NEBO – MADABA – ALLENBY BRIDGE – JERUSALEM Breakfast and departure for Mount Nebo, the place where Moses glimpsed the Promised Land and where some say he died and was buried. We will continue on to Madaba, the city of mosaics, where we will take a panoramic tour. Lunch and continuation to the Allenby Bridge to cross the border to Israel. Border procedures and change in coach. Continuation to Jerusalem. Transfer to the hotel, Dinner and lodging.

DAY 7 JERUSALEM Breakfast in the hotel. Departure for Mount Zion, where we will visit the Basilica of the Dormition of the Virgin, as well as the Cenacle (site of the Institution of the Eucharist) and the Tomb of King David. Lunch. In the afternoon, solemn Stations of the Cross from the Saint Steven’s Gate, traveling through the Pool of Bethesda, Church of Saint Anne, the area of Roman flagstones (Gk., lithostratos), as well as fourteen stations of the Via Dolorosa, the Basilica of the Holy Sepulchre, where Holy Mass will be held. Tour of the Basilica and commemoration of the Resurrection. Dinner and lodging.

DAY 8 JERUSALEM – BETHLEHEM – AIN KAREN – JERUSALEM Breakfast. Departure for Bethlehem and Tour of the Manger and the Church of the Nativity, the Church of Saint Catherine and the Grottos of Saint Jerome. Lunch. On returning to Jerusalem, tour of the Shepherd’s Field and The Fields of Boaz. Continuation to Ain Karen, birthplace de Saint John the Baptist and place of the Visitation of the Virgin Mary to her cousin Elizabeth. Transfer to the hotel. Dinner and lodging.

DAY 9 JERUSALEM – MOUNT OF OLIVES – JERUSALEM Breakfast. Departure for the Mount of Olives. Tour of the Church of the Pater Noster, of the Ascension and Dominus Flevit, as well as the Garden of Gethsemane with its millennial olive trees, the Basilica of the Agony, the Tomb of the Virgin Mary, the Grotto of the Disciples and Saint Peter in Gallicantum. Lunch and remainder of the afternoon free in Jerusalem. Dinner and lodging.

DAY 10 JERUSALEM – ABU GOSH – JAFFA – TEL AVIV – MADRID Breakfast. Tour of Abu Gosh, Latrun and the city of Jaffa, which houses one of the oldest ports in the world. Lunch. Departure for Tel Aviv and transfer to the airport to leave on the afternoon flight to Madrid. Arrival and END OF TRIP 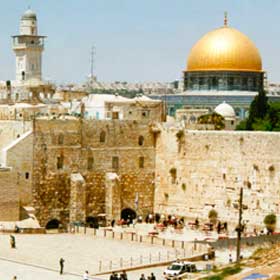 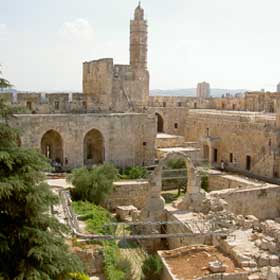 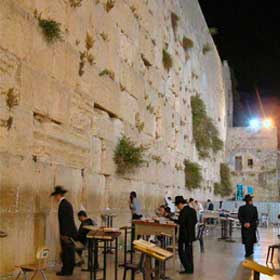 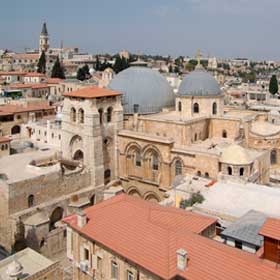 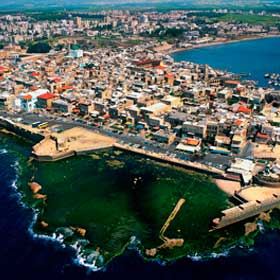 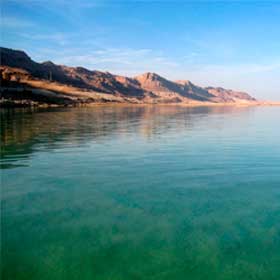