DAY 1 PARIS Pick up from the Paris Airport. Transfer to the hotel and Lodging.

DAY 3 PARIS – GHENT – BRUGES – BRUSSELS Breakfast. Departure for Brussels, traveling through Ghent and Bruges. Se caracteriza for being one of the most picturesque cities in Europe. Continuation to Ghent. Free time to wander through the city and contemplate its Cathedral, Romanesque, Gothic and Baroque in style. Continuation of the journey to Brussels. Transfer to the hotel. Lodging.

DAY 5 AMSTERDAM – COLOGNE (RHINE RIVER CRUISE) – FRANKFURT Breakfast and panoramic tour of the city, where we will contemplate the famous Dam Square, the Amstel River which crosses the entire city, numerous gardens with multicolored flowers and buildings from the 12th and 13th centuries Departure for Cologne, where we will have free time to admire its Gothic Cathedral, the Church of Satin Martin and the Church of the Apostles. Departure to take a boat cruise on the Rhine. Continuation to Frankfurt, arrival, and transfer to the hotel. Lodging.

DAY 6 FRANKFURT – HEIDELBERG – ROTHENBURG – MUNICH Breakfast. Departure for Munich with stops in Heidelberg and Rothenburg. We will be able to enjoy both cities during the stops that we will make. Continuation to Munich, transfer to the hotel and lodging.

DAY 7 MUNICH – SALZBURG – VIENNA Breakfast. Morning panoramic tour of Munich, seeing the Gothic Church of Our Lady (Frauenkirche), emblem of Munich. We will also be able to listen to the carillon of the Marienplatz, and in short, enjoy the capital of Bavaria. Departure for Vienna with a stop in Salzburg. Arrival in Vienna, transfer to the hotel and Lodging

DAY 8 VIENNA Breakfast. Morning panoramic tour of this imperial and gorgeous city, visiting the Ringstrasse (one of the most monumental avenues), Town Hall, the National Theater, the Opera House, the Danube, Parliament, St. Stephen’s Cathedral (one of the jewels of the Gothic period, constructed between the 15th and 16th centuries), etc. Afternoon free. Lodging

DAY 10 PRAGUE Breakfast and panoramic walking tour of this enchanting city, where we can become acquainted with the Charles Bridge with its splendid bridge towers and its 30 groups of statues, the Old Town Square, the Church of Our Lady before Tyn, the Saint Nicholas Church, The Old City Hall , the Powder Tower, etc. Afternoon free to enjoy of the city. Lodging.

DAY 11 PRAGUE – BERLIN Breakfast and departure for Berlin. Arrival and panoramic tour of the city, unique in Europe due to its history, apearance and atmosphere. Highlights include its Neobaroque cathedral (principal center of Prussian Protestantism constructed between 1893 and 1905), City Hall, the Brandenburg Gate (symbol of Berlin), the Kaiser Wilhem Memorial Church, Saint Nicholas’ Church (the oldest sacred building in Berlin), the Victory Column, etc. Transfer to the hotel. Lodging.

DAY 12 BERLIN Breakfast. At the scheduled time, transfer to the airport. END OF TRIP. 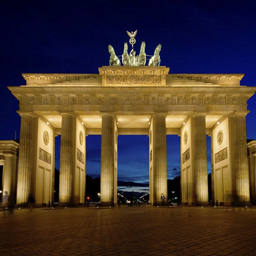