DAY 1 MADRID – LUXOR Departure on a regular flight to Luxor. Arrival in Luxor, reception in the airport and visa procedures. Transfer to the boat and key return. Dinner on the boat. Lodging.

DAY 2 NILE RIVER CRUISE Breakfast. Departure to take a tour of the Luxor Temple which is situated in the center of the city of Luxor. The temple was constructed by Amenofis III and Ramses II in the 16th century before Christ. The temple was connected to the Karnak Temple by the famous Avenue of Sphinxes. One of the obelisks from the entrance of the temple was taken to the Place de la Concorde in Paris. After the tour of Luxor, we will head to the Karnak Temple, the Amun-Re Temple (the sacred precinct of Thebes) which is full of obelisks, columns and gigantic statues. The great Karnak Temple Complex was constructed by many pharoahs, and therefore it is the largest temple made for the worship of a god in the history of humankind. Lunch. After lunch, we will cross the Nile to visit the west bank of the river and to admire the Valley of the Kings, where 62 kings are buried in the tombs excavated in the mountain, and the temple at Deir el-Bahari, a temple constructed by Queen Hatshepsut and called Deir el-Bahari because Christians in the 16th century used it as a convent. After the visit, we will pass through the Colossi of Memnon. Return to the boat. Travel by boat to Edfu. Dinner on board and Lodging.

DAY 3 NILE RIVER CRUISE Breakfast and departure to take a tour of Edfu, temple constructed by Ptolomeo III in the year 235 B.C. and marked by its good state of conservation. It is dedicated to the God Horus, the Falcon God. Return to the boat. Lunch and travel by boat to arrive in Kom Ombo to take a tour of the temple of the same name. The temple is dedicated to the gods Sobek and Horus. Return to the boat. Travel by boat to Aswan. Dinner and Night on board in Aswan.

DAY 4 ASWAN Breakfast and departure to visit the Aswan Dam, one of the largest dams in the world. Later, we will visit the unfinished obelisk to demonstrate the technique of making the obelisks. Return to the boat. Lunch on board. Afternoon free. Dinner and lodging on board.

DAY 5 ASWAN – CAIRO Breakfast. At the designated time Departure on a regular flight to Cairo. Arrival in Cairo. Lunch. Transfer to the hotel. Dinner and lodging.

DAY 6 CAIRO Breakfast and departure to take a tour of the Giza Complex to contemplate the pyramids and the Sphinx. Khufu’s Pyramid extends for 13 hectares and originally reached a height of 146 m. The second pyramid, Khafre’s, has a height of 136 mts. The third pyramid, constructed by Khafre’s son Menkaure, has a height of 62 mts. The Sphinx, mythical statue with a lion’s body and a human head, is 70 meters long and 20 meter tall. The Sphinx and the three pyramids were considered one of the most important wonders of the ancient world. Lunch. Afternoon tour of the Egyptian Museum, one of the largest museums in the world whose valuable monuments are 5,000 year old. We will be able to admire the Treasures of Tutankhamun. Return to the hotel. Dinner and lodging.

DAY 8 CAIRO – MADRID Breakfast. Transfer to the Airport at the designated time to embark on regular flight to Madrid. Arrival in Madrid. END OF TRIP 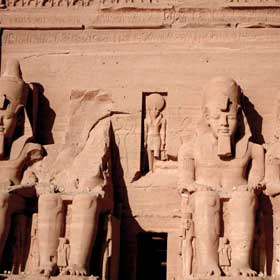 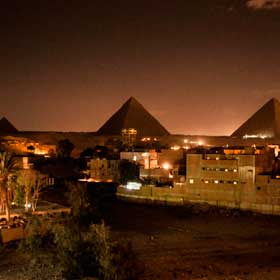 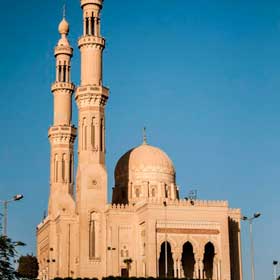 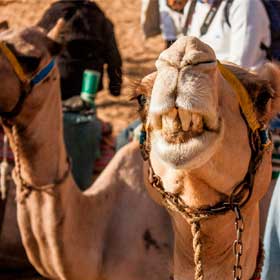 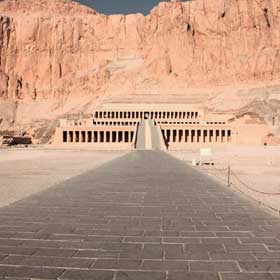