Departure in train AVE for Lérida. Arrival in Lérida, on the banks of the Segre River and whose foundation is attributed to the Celts. Dinner in restaurant, based on typical leridian cuisine (caracoles a the llauna, etc). Lodging.

Breakfast and departure to take a tour of the city, Calle (Street) dels Cavallers, the Zuda, former Muslim fortress, the Cathedral, the walls, Cervantes Square, Rambla de Aragón, Church of Saint Lawrence, of Romanesque-Gothic style, the Paeria Palace, which houses Town Hall. Continuation to San Sadurní and Tour of a wine cellar of Cava (Parxet or Juvé i Camps or Marquis of Monistrol, etc). Lunch and Continuation to Barcelona. Afternoon free for purchases or strolling through this cosmopolitan city believed to have been founded by the Carthaginian Hamilcar Barca, giving it the name of “Barcino” (city of the Barca). Dinner in the Palau del Mar or the Barceloneta, based on rice with sea food. Lodging.

Breakfast and departure to take a tour of the Gothic Quarter, with the Plaza de Sant Jaume, whose origin goes back to the time of Roman domination, which can be appreciated in the remains of the defensive walls from the period, such as the gate of the Plaça Nova, site of the Palace de the Generalitat and Town Hall. In Paradís Street, in the ground, you can still see a millstone that shows the place inhabited, before the Romans, by the Iberain tribe of the Layetanos. Other points of interest in this neighborhood are the Royal Palace Mayor, the Church of Saint Ágata, the palace of the Archive of the Crown of Aragón, the Cathedral and the medieval palaces of Casa dels Canonges, of the Pia Almoina and of the Ardíaca. We will also visit the Sagrada Familia, the the most ambicious and representative project of the architect Gaudí, unfinished due to his early death (he was hit by a street car). In 1976, the sculptor Subirachsse took over the decoration of the façade of the Passion, with the intention of returing the temple to its splendor. Its construction was begun in 1881 in Neogothic style by the architect Francisco de Paula del Villar, and in 1883 Gaudí received the charge of continuing the workds, giving the building a great originality. The dome is surrounded by five towers that simbolize the Virgin and the four Evangelists. Typical catalán lunch (butifarra, calcots, etc). After lunch, continue to Lérida, where we will take the AVE train to Madrid. Arrival and END OF TRIP 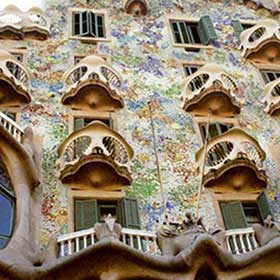 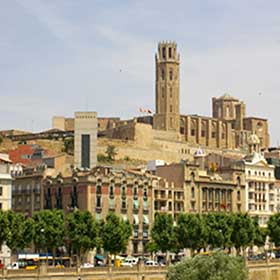