DAY 1 BARCELONA Departure from our point of origin on a regular flight bound for Barcelona. Arrival in Barcelona and meeting with the attendant. Transfer to the hotel. Orientation meeting and free time. Dinner and lodging.

DAY 4 BARCELONA – EXCURSION TO MONTSERRAT AND SANT SADURNI D’ANOIA Breakfast. In the morning we will visit the Shrine of Montserrat, set in a spectacular granite landscape where Our Lady of Montserrat, Patron Saint of Catalonia and known by the name of the Moreneta, is venerated. Then we will vist a winery and discover the ancient traditions that still live on in Sant Sadurní, a land famous for its vineyards and the production of cava. Tour of cava winery to taste this sparkling drink (Parxet or Juvé i Campas or Marquis of Monistrol, etc). Return to the hotel. Dinner and lodging.

DAY 5 BARCELONA Breakfast. We will visit the Picasso Museum, which has the most complete collection in the world of the works from Picasso’s youth, making it the best reference point for understanding the artist’s formative years. We finish the day with a tour of the famous Camp Nou Stadium, to get to know the history and the values that make Barça “more than a club.’ Return to the hotel. Dinner and lodging.

DAY 6 BARCELONA – HUESCA – LLEIDA – PAMPLONA Breakfast. Departure for Huesca, whose history dates back more than two thousand years and where today they still preserve the remains of the ancient medieval wall and important Romanesque buildings that surround the Seo Cathedral and the historic center. We continue on to Lleida, a city that has welcomed diverse cultures throughout its history. The old Cathedral (Seu Vella), symbol of the city, is prominently displayed on a hill in the Old City. Crossing the Basque lands, we arrive in Pamplona, a city full of history and deep traditions. Transfer to the hotel. Dinner and lodging.

DAY 7 PAMPLONA Breakfast. In the morning, we will visit this city know worldwide for the bullfighting that is celebrated annually, the Festival of San Fermín. We’ll take a sightseeing tour of Pamplona, highlighting views of Castle Square (Plaza of the Castle), the Old Town and the Gothic Cathedral. Afternoon free. Return to the hotel, dinner and lodging.

DAY 8 PAMPLONA – BIARRITZ – SAINT SEBASTIAN Breakfast. Departure for Biarritz, to stroll through what is without a doubt the tourist destination par excellence in the Basque Country, and, to tell the truth, it is not without reason: the Rock of the Virgin, the Old Port, the Museum of the Sea, the Fishermen’s Port, the Rough Rock, the Grande Plage, the Hôtel Du Palais, Clemenceau Square, the Casino, castles and palaces….Everything is beauty, glamour and luxury in Biarritz. Continuation to San Sebastian and transfer to the hotel. Dinner and lodging.

DAY 9 SAINT SEBASTIAN – BILBAO Breakfast. Morning panoramic tour of this city, where the urban layout unfolds looking at the Bay of the Concha. We will visit: Igeldo Mountain, an unbeatable lighthouse to enjoy views of the city, at whose feet lies towerpea Point, with the “Comb of the Winds,” Ondarreta Beach, framed by a landscaped area and the Parrot’s Beak, place chosen by Queen Maria Cristina (18th century) to construct Miramar Palace, the seafront promenade of elegant railings and streetlamps runs along the Concah Beach, in whose sand is placed the Pearl of the Ocean Spa, the former royal bathing hut, the former Casino, now City Hall, Old Town, the Marina and the fishing district. In the afternoon, we will continue on to Bilbao, capital of the Basque Country and the industrial district of the region. Dinner and lodging.

DAY 10 BILBAO Breakfast. Morning tour of Bilbao. We will discover the intense urban life in the center of the Vizcayan capital, its old town “the seven streets” and its environments, which make up the principal area of day and nighttime entertainment, with narrow streets and houses with very well kept balconies, counterpoint to the financial and industrial environmnet, we will stroll through Arenal, through the New Square or Unamuno Square. We will visit the famous Guggenheim Museum of Contemporary Art, work of the Canadian-American architect Frank Gehry who represents a magnificent example of the most avant guarde architecture of the 20th century. Afternoon free. Return to the hotel. Dinner and lodging.

DAY 11 BILBAO Breakfast. Transfer to the airport for your scheduled flight to our point of origin. End of services. 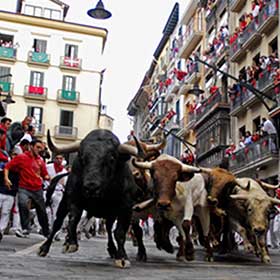 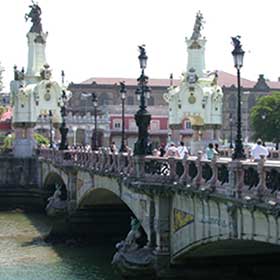 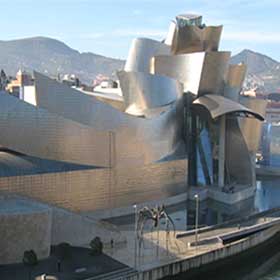