DAY 1 MADRID – GANDÍA Meeting at the scheduled time and designated place to leave for Gandía, birthplace of Saint Francisco de Borja, fourth Duke of Gandía, Viceroy of Catalonia, grandson of Pope Alexander VI and third general de the Society of Jesus. Arrival to the hotel. Lunch. In the afternoon, city tour, where we highlight the Ducal Palace. We will also admire the Collegiate Church from the outside and the old University that Saint Francisco de Borja founded. Return to the hotel. Dinner and lodging.

DAY 2 GANDÍA – MURCIA – (EXC. CARTAGENA) Breakfast. Morning departure for Murcia. Tour of the Salzillo Museum, dedicated to famous scuplture Francisco Salzillo, the compound offerse various rooms in which are exhibited the great sculptures made for the Holy Week processions and property of the Confraternity of Our Father Jesus of Nazareth. Lunch. Afternoon departure in order to take an excursion to Cartagena. Tour of the historic-comercial center of Cartagena to enjoy its eclectic and modernist decoration, old façades, Squares, monuments, churches. We will stroll through the Calle Mayor, with its splendid façades. We will cross the popular and bustling square of Saint Francis. We will pass by the magnificent City Hall, the historic Casino of the city and the Aguirre Palace. Return to Murcia. Dinner and lodging.

DAY 3 MURCIA – CARAVACA DE LA CRUZ – ALBACETE – MADRID Breakfast and departure for Caravaca de la Cruz. From 1998 it is one of the five cities of the world, where the Jubilee Year is celebrated in perpituity. Starting in the year 2003 it will be celebrated every seven years and a plenary indulgence will be awarded to the pilgrims that go to Caravaca. The Cross is a “Lignum Crucis”, on footce of wood from the cross on which Christ was crucified, that is kept in a reliquary with the shape of a crucifix with double arms. Caravaca’s monumental and artistic legacy is considered one of the más prominent in the region of Murcia. Tour of the most characteristic and important monument of the city for its historic, Cultural and religious significance, the Shrine of the True Cross, excellent example of the Spanish baroque and one of the largest pilgrim centers of Christianity, since it guards the Most Holy True Cross. Tour of the Museum of the True Cross. Lunch and departure for Madrid via Albacete. Arrival and end of services. 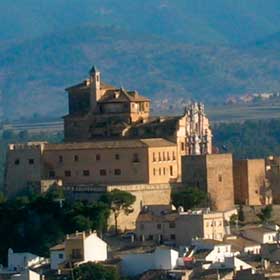 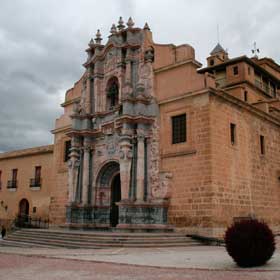