Meet at the agreed upon time to leave by luxury coach for Salamanca. Arrival in Salamanca, free time to stroll through this lovely university city where the Cathedral, the Casa de las Conchas (the Seashell House), the Plaza Mayor (Main Square), etc, stand out. Lunch. Continuation to the city of Guijuelo where we will visit a ham dessicator and enjoy some tapas. We will continue on to Candelario, typical mountain town nestled in the Sierra de Candelario. Transfer to the hotel. Dinner and lodging.

Breakfast. Full day excursion with Lunch at the Sierra de Francia. Departure for Béjar, the southernmost city of the old Kingdom of León characterized by the beauty of its site, in the foothills of the mountains with the same name as the city. The elongated Old Town of the city resembles a stranded boat on a small moutainous crest. The Ducal Palace and the old churches of Romanesque origin rest in this precinct. Continuation to La Alberca, crossing the Sierra de Francia. Arrival in La Alberca, traditional and liturgical town. The marked religious spirit has configured its character for centuries, projecting it in ritual expressions in all areas of its life.  It has rites for birth, life and death. One need only to walk through the streets of La Alberca and the surroundings to see religious manifestations engraved in stone. Return to Candelario. Dinner and lodging.

Breakfast. Departure for the city of Plasencia. Free time to stroll through this walled city, where the aqueduct of Saint Antón, the Casa Consistorial, the public jail, etc., stand out. Continuation across the valley of the Jerte River to the city of Tornavacas, from where we can admire the entire valley. We will continue our trip to Barco de Ávila. Lunch. Continuation of the trip to Madrid via Ávila. Arrival in Madrid and END OF TRIP 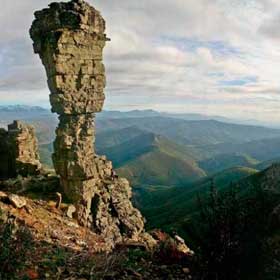 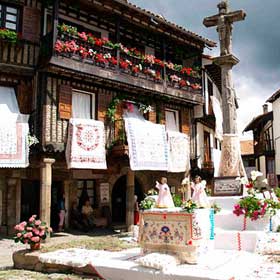