Departure from the scheduled point for Boadilla of the Mount, where the Palace of Prince Don Luis stands out. At the beginning of 1764 Prince Don Luis commissioned from Ventura Rodríguez the construction of Mount Boadilla Palace (more accurately the remodelling of the already-exiting Palace of Two Towers).  The rectangular building consists of three parts with three floors. Across from the main façade of Prince Don Luis’ Palace there is a fountain attribued to Ventura Rodríguez.  The convent of the Incarnation is also prominent. The Discalced Carmelite Nuns inhabited the Convent for the three centuries following its foundation, until the middle of the decade of 1970 and as a result of the poor state of the monumental complex, they had to be transferred to another convent. Since then the deteriorization of the building worsened, until 1980 when the Cultural Ministry declared the complex, a national monument and saved it from ruin. Continuation to Villa Viciosa de Odón, peaceful and tranquil town located to the southeast of Madrid. One of the most important buildings of Villa Viciosa is the Godoy House, which was built at the beginning of the 15th century in the style of the House of The Austrias. It combines Castilian sobriety and imperial elegance that developed between the herrerian and the baroque periods. The castle, today an archive, also stands out at the highest point of the town. Lunch and continuation to Navalcarnero, a tranquil town, founded in 1944, whose surroundings are characterized by tasty and fruity wines. It is located 31 kilometers from the capital. Its arcaded Main Square, built in the 16th and 17th centuries, is prominently nestled in its old town. There, in the heart of the town there is much to admire: its temples and hermitages like the Church of the Assumption, the Church of Covadonga, the House of Chains, the monument to the Confinements and numerous emblazoned houses.  Upon finishing we will return to our point of departure and END OF TRIP. 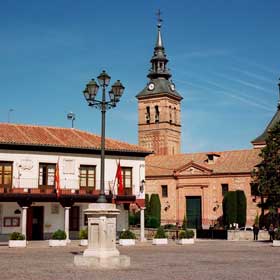