DAY 1 MADRID – VILNIUS Meeting in Barajas Airport at the indicated time to embark on flight to Prague. Arrival in Prague and connection to the flight to Vilnius. Arrival and transfer to the hotel. Dinner and lodging.

DAY 2 VILNIUS Breakfast and departure to take a tour of Vilnius, capital of Lithuania. We will be able to contemplate its lovely Old Town, with narrow and sinuous streets that date from the 15th and 16th centuries, full of charm and history, the Christian cathedral, which is not only a place of worship but also a symbol of the identity of the city, the Jewish Quarter, the Gothic church of Saint Anne, the university. Lunch. Departure for Trakai, which was capital of Lithuania in the 15th century, where we will see the Gothic castle from the 15th century situated in a small island of Lake Galve. Return to the hotel. Dinner and lodging.

DAY 3 VILNIUS – EXCURSION TO KAUNAS Breakfast. Departure to take an excursion to Kaunas, second most important city in Lithuania. We will see Town Hall, the Music Palace, the Cathedral, etc. Lunch. Tour of the Art Museum. Return to the hotel. Dinner and lodging.

DAY 4 VILNIUS – RUNDALE PALACE – RIGA Breakfast. Departure for Siauliai to see the pilgrimage center known as the Hill of the Crosses. Continuation to the Rundale Palace, magnificent palace from the 15th century, former residence of the Duke of Courland designed by the same archtect who designed the winter palace of Saint Petersburg. Decorated with authentic furniture and porecelain from the period, the Gold and White Salons, as well as the bedroom of Duke Johan Ernest Biron, impress. The palace is the baroque masterpiece of the Baltic States. Lunch. Continuation to Riga, capital of Latvia. Dinner and lodging.

DAY 5 RIGA Breakfast. Departure to take a tour of the city. The Old City, which dates from the medieval period, is an enchanting labyrinth of alleyways, parks, rivers and canals. We will discover a great variety of buildings, from Romanesque to Neoclassical, the Central, the boulevards of Riga, with its beautiful parks, Bulwark Hill, the Powder Tower, the fantastic Art Nouveau buildings, the bridges of the Daugava River, the Church of Saint Peter, the Swedish Gate, the Church of Saint Jacob, Parliament, etc. Its most imposing building is the Lutheran Cathedral, from the 12th century, and Pila Castle, constructed between 1328 and 1515. Lunch. Continuation de the visit. Dinner and lodging.

DAY 6 RIGA – PAERNU – TALLINN Breakfast. Departure for Paernu, lovely coastal city and the largest city spa in Estonia, where we will be able to stroll through its famous pedestrian street Pahavaino. Continuation to Tallinn, capital of Estonia, having lunch en route. Arrival toTallinn. Dinner and lodging.

DAY 7 TALLINN Breakfast. Full day tour de Tallinn. We will visit the two parts into which it is divided, the Upper City and the Lower City. The Upper city is the administrative and most aristocratic, with governmental offices and the Toompea Fortress, with its Main Castle, famous for its gardens and its towers. In the Lower City the animated Market Square, with its cafés and artisan shops, Town Hall and the Municipal Pharmacy, still functioning since its Medieval origin, all stand out. The city has two Cathedrals, the Russian Cathedral of Alexander Nievski and the Cathedral of Saint Mary. We will visit the historic center, one of the best preserved medieval neighborhoods in all of Europe and UNESCO World Heritage Site. Lunch during the tour. We will stroll through the commercial Pikke Street, with its flower stands and artisan shops, where the three oldest buildings in Tallinn, known as the three sisters, are found. Dinner and lodging.

DAY 8 TALLINN – MADRID Breakfast. Transfer at the designated time to the airport to embark on regular flight to Madrid. Arrival and END OF TRIP 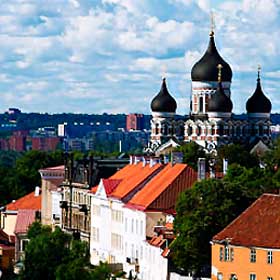 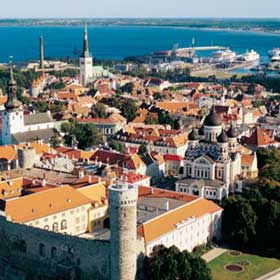 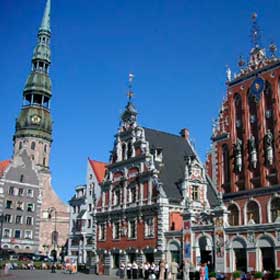 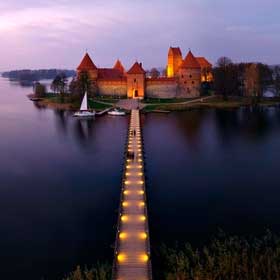 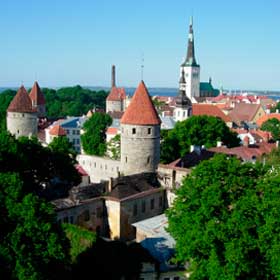