Meeting at the specified time and place. Departure from Madrid for Alcalá de Henares. Situated 30 km from Madrid it has become an essential destination for Cultural tourism. Birthplace of Miguel de Cervantes, it was declared World Heritage Site in December of 1998, in recognition of the fact that Alcalá was the first university city planned as such in the world. Among Alcalá’s innumerable monuments we point out: The masterful Cathedral, the Saint Bernard Convent, the Museum-House of Cervantes…Continuation of the trip to Guadalajara, next to the Henares River, it is a town with a Renaissance air, with monuments like the palace de the Dukes of the Infantado, one of the most emblematic monuments of Guadalajara. Its current appearance is the result of numerous reforms imposed with the passage of time. Today we find a magnificent work in which the Isabeline Gothic mereges with the Renaissance Mannerism, Church of the Royal Saint Nicholas (17th century): Declared a monument in 1981, it was earlier a church of the Jesuit School of the Trinity. Baroque in style, its front facade of Stone with a statue of Faith stands out along with the Churches of Saint Ginés, Saint James and Saint Mary (Co-Cathedral).  The Luis de LuDinner Chapel, which is found near the old and now disappeared Church of Saint Michael, was designed by Luis de Lucena, doctor and humanist who lived in the first half of the 15th century, becoming a personal doctor for various popes in Rome. Lunch and continuation of the trip to Pastrana, medieval village in which the Ducal Palace is prominent and declared Historic-Artistic Complex in 1968. Return to Madrid and END OF TRIP. 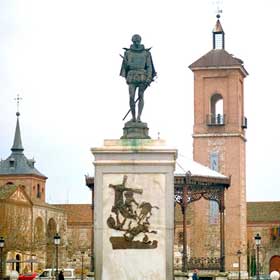 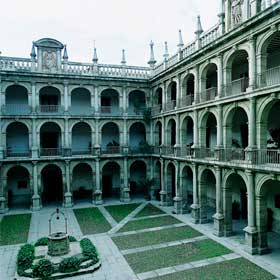