Departure from Madrid at the scheduled time for Alcaraz. Alcaraz rises on a hill of reddish and  mauve tones and is surrounded by the mountains of the Sierra de Alcaraz. We highlight its Main Square, made up of elegant buildings with a stylistic unity, the Lonja, the Tardón Tower, the Reservoir and Town Hall.  Time to take a walk through its steep streets with old houses. Lunch, and after lunch we will cross the Sierra de Alcaraz and arrive to the birthplace of the Mundo River, in the place known as “La Cueva de los Chorros“ (Cave of the Jets) where the Mundo River, tributary of the Segura, is born, spilling its first waters in amphitheater 200 meters tall with limestone walls in the forms of intertwined horseshoes of gray, ochre, blue and black líquenes. The spectacularity of “Los Chorros,” one of the lovliest waterfalls in the Penninsula, is one of the most-visited natural areas in Castile-La Mancha.  Free time to walk along the paths between leafy vegetation. Departure for Riopar. Dinner and lodging.

Breakfast. Tour of Old Riopar. Today the first Riópar is called Old Riópar (Riópar Viejo). We will stroll through Old Riopar, a village situated on the summit of a pronounced hill that conserves the medieval imprint. It shows the walls of its Arabic castle, the Cementery and the Church of the Holy Spirit with its Mudejar covering, declared historic artistic monument. Departure for Villa Nueva de los Infantes, old city of the Campo de Montiel that has grown around the Main Square, neoclassical, built in golden sandstone and considered one of the most attractive in La Mancha. Free time to stroll through the streets of Santo Tomas and Cervantes replete with houses and palaces. Lunch and continuation to Madrid and END OF TRIP. 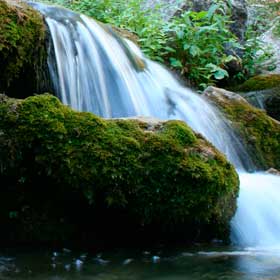