Meeting at the agreed upon time to leave for Cadalso, where we will take a tour of a typical wine cellar, tasting the wine, and where we can contemplate the parish church of Our Lady of the Assumption, the arch of the ancient hermitage of Santa Ana, Villena Palace, catalogued as Heritage of Cultural Interest along with its gardens, and that was constructed with stone in the 15th century. It was recreation grounds and resting spot for Don Álvaro de Luna.  We will also be able to contemplate the Fountain of the Cottonwods (Álamos), of Muslim origin  and ancient spring in the living rock. Continuation to the Adrada, town that sits at the foot of a hill upon which a castle was constructed and recently reconstructed. We will be able to visit it.  Its interior houses the Historic Interpretation Center of the valley of the Tiétar, and there we will be able to see among other things, an audiovisual that details the history of the fortress. Continuation to Pedro Bernardo, town that offers the visitor wonderful local color, with narrow alleyways, passageways and portals with coffered ceiling, balconies, lintels and sunrooms that constitute a beautiful example of popular architecture and that have made it worthy of being of the most attrative towns in the area, and where we must point out its old town, an in particular the old City Hall and its Church. Departure for Arenas de San Pedro, nestled  in a closed little valley protected by several little mountains whose waters lead to the Arenal River that runs from the north to the south and that marked in its day the town limits and where we can contemplate the old part of the city, with its City Hall, its Gothic church with three naves sustained by four central columns. The old neighborhoods, the Gothic castle with a  square footprint finished with a crenellated parapet, as well as the palace of D. Luis Antonio de Borbón of the last third of the 15th century. Lunch. Departure for Las Cuevas del Águila, where we will take a tour of its famous grotto, one of the best marvels of the valley of the Tiétar, located in a fairlyl extensive area made up of crystaline limestone,  probably from the Cambrian Period, strongly folded and that erosion has left a few hills of little height that rise over the Arenal and Avellaneda Rivers. Continuation to Talavera de la Reina, city that occupies a strategic point in the middle valley of the Tagus, in an extensive and fertile plain that has received influence from numerous cultures. Free time. Return to Madrid. END OF TRIP 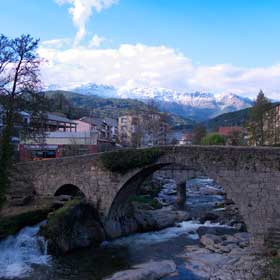