Meeting at the specified spot to leave by coach for Sigüenza, medieval and millennial city, where its stones speak of history, of legend and inherited traditions. Highlights: the Doncel House was begun in the 12th century, although few of its first foundations remain in the basement. It must have been completed between the second half of the 15th century and beginning of the 16th. It has had a lengthy existence and has been the home of a rich mosaic of illustrious people from important families. The outside appearance of the construction looks like a house-tower, with divisions in three floors that denote its residential character, due to its windows, gargoils and decorations, as well as the bells that crown it. Its interior offers examples of salons decorated with mudejar cenefas, separated by beautiful identical plaster archesde. The Cathedral, constructed in the 11th century as defensive fortress, is Romanesque in style and was developed later following Gothic lines. Its exterior appearance is that of a medieval fortress, with two strong square towers, a Romanesque portico and an imposing rose window, giving it the nickname of the  “Fortis Seguntina,“ the Plaza Mayor, the Castle (Tourism Parador), where we highlight the Court of Arms. Continuation of the trip to Atienza, peppered with Romanesque churches –some converted into museums– and crowned with the remains of its castle from the 11th century, a imposing mass that arises on a steep rock. Atienza recognizes what it was in the Middle Ages. The arch of Arrebatacapas, the former gate in the the wall, serves as access to the beautiful Wheat Square (Plaza del Trigo), its steets with elegant emblazoned houses and exceptional monuments. A great deal of art, but also history, landscape and life will surprises us in every corner of this route that enriches the Castilian land. Lunch and continuation to Medinaceli. Due to its strategic location, the town of Medinaceli was an important city surrounded by walls in the Roman period. Later the Arabs made it into the general military quarters. With numerous Roman and Arab remains in Medinaceli we will visit the Archaeological Classroom that recreates the Roman period and the Roman mosaics that are found in one of the rooms of the Ducal Palace.  Return to Madrid and  END OF TRIP. 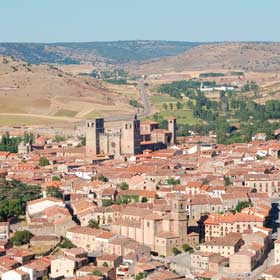 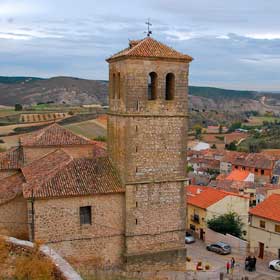