DAY 1 MADRID – YEREVAN Meeting in Barajas Airport at the indicated time to leave on a flight to Armenia, Yerevan. Arrival and transfer to the hotel. Dinner and lodging.

DAY 2 YEREVAN Breakfast. In the morning we will take a panoramic tour of the city to see the main buildings like Matenadaran (Manuscript Museum, one of the most important in the world), the city park, Abovyan Street, Republic Square, and the center of Contemporary art Gafesjian. Lunch in restaurant. In the afternoon, we will visit the National Museum of History, one of the most important in Armenia. Remainder of the afternoon free until the welcome dinner in a traditional restaurant with folklore. Return to the hotel. Lodging.

DAY 3 YEREVAN – EXCURSION TO ECHMIADZIN, ZVARTNOTS, GARNI AND GERARD Breakfast. Departure for Echmiadzin, important city known as the Holy City of Armenia because it has an incredible religious Historic Architectural Grouping made up of a cathedral, the oldest of the country, and the churches of St. Gayane and St. Hripsime. The entire Historic Grouping has been declared World Heritage Site due to is historic and monumental value. Continuation to the Temple Zvartnots, World Heritage Site, constructed in a time when a large part of Armenia found itself under Byzantine control and the beginning of the invasions of Armenia by the Muslim Arabs. Then we will visit the Geghard Temple, World Heritage Site and a unique construction excavated partially into the mountain and surrounded by cliffs. The monastery was originally called Ayrivank “Monastery of the Cave” and currently Geghard “Monastery de the Lanza” which comes from the lance that wounded Jesus in the Crucifixion. From there we will walk to the Garni Temple, a temple similar to the Parthenon and whose bath, which it still conserves, is of special interest. Walking another 15 minutes we will arrive to a private house in Garni where we will see how “Lavash” (typical Armenian bread) is made. Lunch in a typical house from the region, with a demonstration of Armenian cooking, spices, as well as the typical Armenian drink that we will enjoy in a rural house. Return to Yerevan for dinner. Transfer to the hotel. Lodging.

DAY 4 YEREVAN – MOUNT ARARAT – KHOR VIRAP – ARENI – NORAVANK – KARAHUNJ – GORIS Breakfast. Departure for the south through the plains of Ararat to visit the Monastery of Khor Virab. Mount Ararat rises in the back part of the monastery, from where we will have a splendid view. The next stop will be the Monastery of Noravank, situated on the hill of a narrow gorge. The Monastery of Noravank is not only a place with nature whose beauty takes your breath away but it is also an architectural delight and World Heritage Site along with the Amaghu Valley. Lunch. After lunch, we will visit a family wine cellar in Vayots Dzor where we will have the chance to taste this excellent wine, symbol of joy and happiness. Continuation to Goris with a stop in Karanhunj, ancient observatory also call “the Armenian Stonehenge.” Transfer to the hotel (typical guest house). Dinner and lodging.

DAY 5 GORIS – EXC. TO TATEV MONASTERY Breakfast. Departure for the Tatev Monastery, which, founded in the 9th century, is the principal historic and architectural monument in the region. This region has the longest aerial tram in the world called “Wings of Tatev,” and it connects the town of Halidzor with the Tatev complex. Picnic lunch. Photographic safari. Return to the hotel. Dinner and Lodging.

DAY 6 GORIS – SELIM PASS – SEVAN Breakfast and departure for Sevan, via Selim Pass, situated in the „Silk Road”. We will visit Selim Caravansary, medieval refuge destined for travelers and their animals on their commerical routes along the “Silk Road.” Lunch in restaurant outside. Continuation to Sevan Lake, considered “the Pearl of Armenia.” It is so austere and majestic that the peaceful turqoise waters are astonishing. We will also visit Noraduz, which contains the largest gruop of khachkars (Stone crosses) in Armenia. Transfer to the hotel in Sevan Lake. Dinner and lodging.

DAY 7 LAKE SEVAN – SEVAN MONASTERY – HAGHARTSIN – DZORAGET Breakfast. Departure to visit the Sevan Monastery, the ancient city of Dilijan (the small Armenian Switzerland). Typical lunch in Dilijan. From there we will go to the Cathedral of Haghartsin, which is very near the spa Dilijan, far from civilization, in the middle of a forest, in the gap of a small river. We continue to Dzoraget. Transfer to the hotel. Dinner and lodging.

DAY 8 DZORAGET – HAGHPAT – SANAHIN – VANADZOR – SPITAK – YEREVAN Breakfast. Departure for the Haghpat monastic complex and Sanahin, two World Heritage Sites. Short tour of the Mikoyan Museum. Lunch. After lunch Tour of the Monastery of Sanahin, celebrated also for its school of calligraphy and illuminations. On the road to Yerevan we will pass through Vanadzor, the third largest city in Armenia, via Sptak (epicienter of the earthquake in 1988) and brief stop in the “Norwegian Hospital,” earlier called Nansen, constructed with the Norwegian donations after the earthquake. Continuation to Yerevan throuh the yezdi-kurdo towns. Stop to take photographs. Transfer to the hotel in Yerevan. Free time. Dinner and lodging.

DAY 9 YEREVAN – MADRID Breakfast. Tour of National Galleries of Yerevan and the Brandy Factory, with tasting of different types of brandy in the galleries of the factory. Lunch. In the afternoon, free time. Dinner and transfer to the airport to embark on a scheduled the return flight to Madrid.

DAY 10 MADRID Arrival in Madrid and END OF TRIP 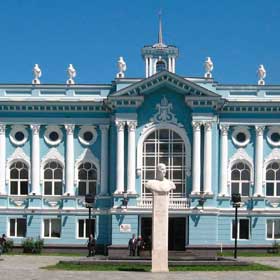 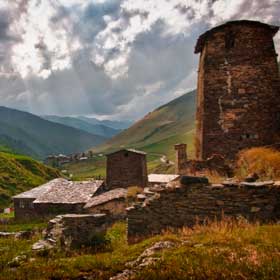 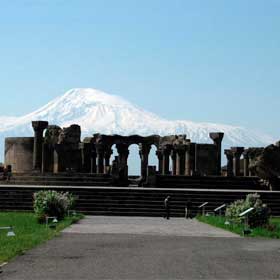 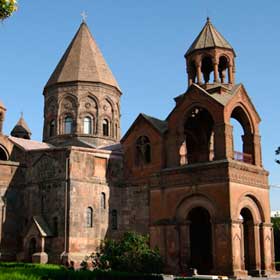 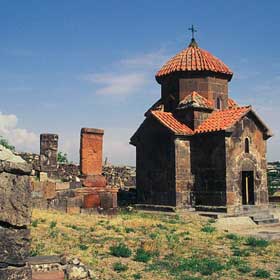 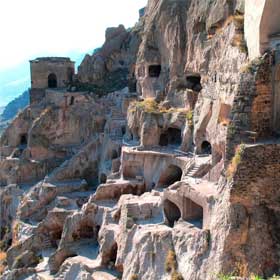